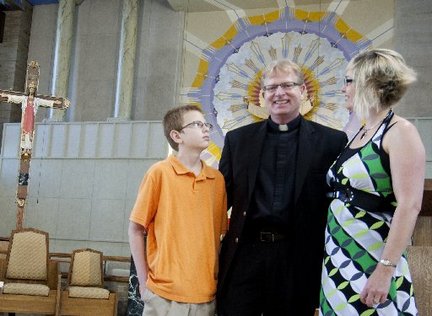 From The Tablet in London:

A bishop who met with Pope Francis in a rare private audience on 4 April has said in an interview that the two men discussed the issue of the ordination of “proven” married men – viri probati – in a serious and positive way.

Bishop Erwin Kräutler, Bishop of Xingu in the Brazilian rainforest, spoke to the Pope about Francis’ forthcoming encyclical on the environment, and the treatment of indigenous peoples but the desperate shortage of priests in the bishop’s huge diocese came up in the conversation. According to an interview the Austrian-born bishop gave to the daily Salzburger Nachrichten on 5 April, the Pope was open-minded about finding solutions to the problem, saying that bishops’ conferences could have a decisive role.

“I told him that as bishop of Brazil’s largest diocese with 800 church communities and 700,000 faithful I only had 27 priests, which means that our communities can only celebrate the Eucharist twice or three times a year at the most,” Bishop Kräutler said. “The Pope explained that he could not take everything in hand personally from Rome. We local bishops, who are best acquainted with the needs of our faithful, should be corajudos, that is ‘courageous’ in Spanish, and make concrete suggestions,” he explained. A bishop should not act alone, the Pope told Kräutler. He indicated that “regional and national bishops’ conferences should seek and find consensus on reform and we should then bring up our suggestions for reform in Rome,” Kräutler said.

Asked whether he had raised the question of ordaining married men at the audience, Bishop Kräutler replied: “The ordination of viri probati, that is of proven married men who could be ordained to the priesthood, came up when we were discussing the plight of our communities. The Pope himself told me about a diocese in Mexico in which each community had a deacon but many had no priest. There were 300 deacons there who naturally could not celebrate the Eucharist. The question was how things could continue in such a situation.

“It was up to the bishops to make suggestions, the Pope said again.”

April 10, 2014
About Bishop Scharfenberger's coat of arms
Next Post

April 11, 2014 Ladies and gentlemen, the bishop of Albany
Browse Our Archives
get the latest from
Catholic
Sign up for our newsletter
POPULAR AT PATHEOS Catholic
1