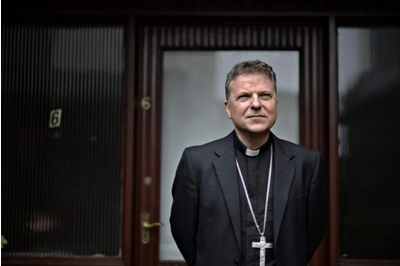 From The Herald in Scotland:

As Scotland’s newest Roman Catholic bishop he could easily have opted for the opulent residence set aside for a man in his position.

But Bishop John Keenan, who grew up in a high-rise in Maryhill, Glasgow, has shunned the more comfortable address to move into a parish house in a housing scheme in an area of multiple deprivation.

Explaining his decision, Bishop Keenan said the Catholic church was going through a cultural shift and would have to “adapt and change in order to be close to the people of our times”.

His first move as the new Bishop of Paisley has seen him decline to take up the detached sandstone villa in the town, in Renfrewshire, used by his predecessors, and move instead to a church property in Greenock’s east end.

In his first wide-ranging interview since being installed last month, Bishop Keenan has told of his concern that those in destitution have been “abandoned by society and the church”, adding he would reflect “a church out on the street not one that’s comfortable in the chapel”.

Echoing the stamp put on Catholicism by Pope Francis, the 49-year-old said there were still structures within the church restricting its ability to reach out to those on the margins of society.

Bishop Keenan said: “Exclusion is a scandal for a country that calls itself Christian.”

He has also spoken of the need to strip some power and responsibility in the church away from the clergy and hand it to lay members, adding he supported the Pontiff’s call for a “new reformation” within Catholicism…

…He said: “I’ve just come from living in a university chaplaincy with a dozen students so I’ve been living surrounded with the buzz of life and fun.

“When I was thinking about becoming a bishop I was keen to take as much of that into my new life, finding people who could form a family with me and support me.

“Priests in Paisley found me a place in St Laurence’s, Greenock. 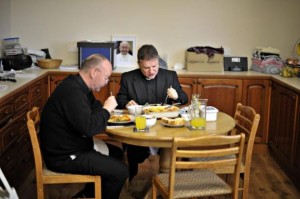 “I am living with the parish priest, Father Gerry McNellis, lots of parishioners come in and out of the house and it has the sound of laughter that makes me feel at home.

“I celebrate the parish Mass and am getting to know the people and that’s perfect for me.”

April 16, 2014
Must-see: special Mass for kids with autism
Next Post

April 16, 2014 "The sacred and profane collide on the Via Dolorosa"
Browse Our Archives
Follow Us!

Changing Jesus: A Perennial Tradition
Changing deeds and words of Jesus is not something recent in Christian...
view all Catholic blogs
Copyright 2008-2017, Patheos. All rights reserved.