“The sacred and profane collide on the Via Dolorosa” 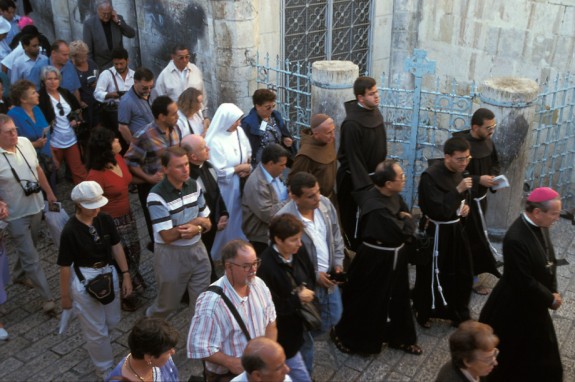 Thousands of pilgrims walk the streets of Jerusalem every year, retracing the footsteps of Christ, the Stations of the Cross, along the Via Dolorosa or “Way of Sorrows.”

Some years back, writer George Martin described his experience of that Way of the Cross, and it’s been posted this week over at my other blog, CNEWA’s One- to-One:

The Via Dolorosa begins in the Muslim Quarter of the Old City of Jerusalem and winds its way through alleys that become progressively narrower and more crowded. Shops line the alleys, offering everything from tourist trinkets to shanks of lamb, from underwear to icons. Young boys hawk postcards; pickpockets and beggars ply their trades. Scattered between the shops are signs and bas-relief sculptures that identify the stations. At some spots one can enter chapels to pray; at others, Jesus’ passion must be commemorated on the street.

Pilgrimage groups stop to pray at a station and shops and passengers are blocked, at least partially. Those who must use the street push through: Hassidic Jews on their way to pray at the Western Wall; Muslim women carrying bundles on their heads; tourists with video cameras. The sights, the sounds and the smells are nothing like the quiet in which we pray the stations back home.

I always try to prepare the pilgrims by telling them we will follow the stations through a living city, like the Jerusalem of Jesus’ passion. Most of those living in Jerusalem at that time were neither his disciples nor his enemies; they were simply going about their lives as he was led to death. How many shopkeepers watched him pass, shook their heads at his misfortune and returned to selling their wares?

Crucifixion in ancient times was a public spectacle, a display of cruelty meant to subdue those harboring seditious thoughts. Jesus’ executioners did not have a religious event in mind. Although we meditate on some horrible scenes while praying the stations, we usually do so in the hushed surroundings of our churches, shielded from the reality of a man sentenced to death. Praying the stations in Jerusalem strips away some of that protective veil. The sacred and the profane collide on the Via Dolorosa.

Some groups making the stations along the Via Dolorosa carry wooden crosses. Each member carries a cross in turn. The crosses are symbolic: they are too small for actual crucifixions. In all likelihood Jesus carried only a crossbeam; upright beams would have been permanently fixed on Calvary. These pilgrim crosses can act as powerful symbols: I have seen people visibly moved while carrying their cross along Jesus’ path.

April 16, 2014
New bishop chooses to live in parish house in an area of "deprivation"
Next Post