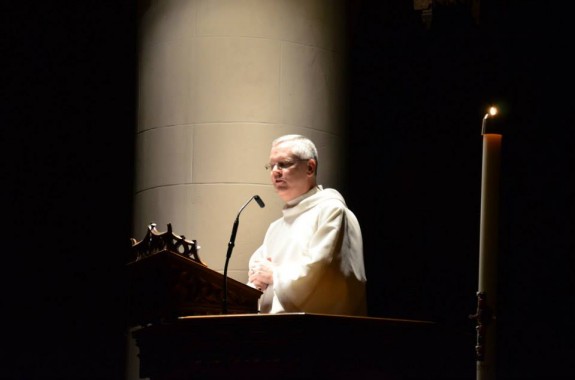 As we prepare to begin the Triduum, I thought I’d post a few homiletic thoughts from the last few years…

Tonight, God gets down on his knees for us.Tonight, He lowers himself. Tonight, He becomes a servant to the world — as humble as a slave, as meager and plain as a crumb of bread.

From this, we learn what it means to be like Christ.

The overwhelming impression is surprising, and challenging. It is God becoming less…so that we can become more.

One of his last acts on earth, the last communal moment with his friends, is spent taking care of them, purifying them, removing the dust of the day. Perhaps he is anticipating the roads they will travel in the hours ahead. Maybe he is somehow getting them ready for the long journey ahead — missions they will undertake after he has gone, traveling by foot to bring the gospel to the world.

I also think it is also a beautiful representation of the priesthood, and the sacrament of reconciliation. We all walk the earth carrying the debris of our lives – our failings, our sins, our weaknesses. They cling to us. But here, they are washed away. We are made new; we can begin again.

And this, too, is what it means to be like Christ.

For four thousand years mankind has re-enacted somehow the great Passover feast of Jesus and all those who came before Him. The memorial feast has continued.

For two thousand years we have gathered around this table and repeated Paul’s beautiful words – the words the Corinthians heard and took to heart.

And down through history, we have knelt and washed one another’s feet with a profound charity and sense of purpose that made Christian love the most powerful force on the planet. Even unbelievers were moved to say, “See how these Christians love one another.”

See what we have done in remembrance of Him.

Here, and now, we wait. We grieve. We mourn. We hope. And our eyes turn to the cross.

In Eden, a tree brought about our condemnation. Today, another tree brings about our redemption. Behold the wood of the cross, on which hung the salvation of the world. And when you think about it, the fruit from that tree —what it brought us, what it gives us—is incalculable. I would argue it is one reason why this Friday should not be called “Good.” It should be called “Great.”

Near the end of this gospel account, Christ utters his last words: “It is finished.”

All the suffering, the bloodshed, the sacrifice, the humiliation comes to an end.

But the story isn’t over.

The simple fact is: this can’t be a day like any other. Scripture tells us that on the day Christ died, the world – literally – cracked open. The earth quaked. To this day, we cannot help but remember what was done for us. As the old spiritual tells us, it causes us to tremble.

But in the midst of all this, we do something remarkable.

We venerate the cross with a kiss.

I’m sure some outside our faith find it strange that we pay tribute to an instrument of death. But they don’t see the cross the way we do. Maybe they should.

Maybe they should try to see that the cross was not an end, but a means to an end – the method God chose to remake the world.

As the sun began to dawn in Jerusalem on that morning 2,000 years ago, a timeless truth dawned, as well.  Jesus is not to be found among the dead.  He is among the living.

What does being a Catholic today mean? It is parents giving up vacations so their kids can go to Catholic school.

It’s those same kids giving up their weekends to be altar servers.

It is May Processions and First Communions and fish fries and bingo. It’s the crèche at Christmas, and this candle at Easter.

It’s the cry of a baby being baptized. It’s the gentle voice of the priest offering absolution to someone who hasn’t been to confession in 20 years – and offering a chance to begin again, and to be made new. And it is silence, the thundering silence of people who come here on any given weekday to light a candle, say a rosary, and pray.

It is the thousands who crowd into this church on an ordinary Wednesday in the middle of the winter to receive ashes.

It is the hundreds who came here just last night to behold the wounded, scarred face of Christ – and venerate his cross with a kiss.

It is the anonymous strangers who stop by the statue of the Blessed Mother outside the church, and leave roses, or folded scraps of paper with petitions. “Mary, pray for my son. Mary, help me find a job.”

Yes. That says it.

Here comes Peter, the denier and Thomas the doubter, and the converted pagan Augustine. Here comes the soldier Ignatius, and the scholar Aquinas, and the tentmaker Paul. Here comes the outspoken Catherine of Sienna and the quiet Therese of Lisieux. Here Martin de Porres, and Andrew Kim — and here comes Francis, preaching to the birds.

We are all that and more. We are monks who copied scripture onto parchment, and preserved God’s word during one of the darkest times in history. We are priests and nuns who could barely speak the language, but came to an unruly place called America and created the most extensive parochial school system on earth, passing on what they knew, and what they believed.

We are laborers from Italy and Poland and Germany who arrived in Brooklyn with nothing, and left behind towering temples of stone and glass in what we now call a City of Churches.

We are Chesterton and Merton and Hopkins. We are Bob Hope and Newt Gingrich, John Wayne and Oscar Wilde, Tony Blair and Fulton Sheen.

We are Oscar Romero and Bobby Kennedy and Caeser Chavez and Mother Angelica.

We are the soldier in Iraq praying the rosary, and the immigrant in the barrio with Our Lady of Guadalupe tattooed on his back.

April 16, 2014
"The sacred and profane collide on the Via Dolorosa"
Next Post

This is Our House. I Won't Be Part...
I just published a post which made it clear that I am...
view all Catholic blogs
Copyright 2008-2017, Patheos. All rights reserved.