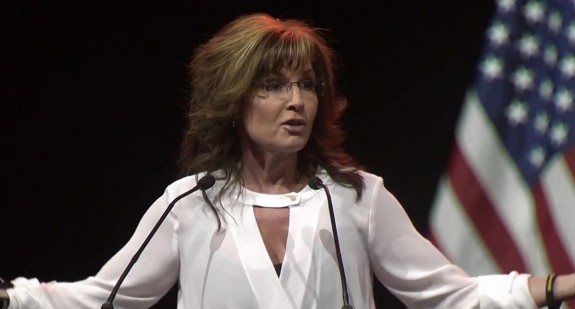 Sarah Palin’s statement that, if she were in charge, “waterboarding is how we’d baptize terrorists” should shock the conscience…

C. S. Lewis warns (I forget where exactly) about one’s glibly getting off, at God’s expense, one-liners that please the crowd but provoke unseen angels to weep. I think Palin’s guardian angel (and yes, she has one, CCC 366) wept at her comparing baptism to waterboarding.

Open contempt for faith and things of religion is broadly associated with the left in America. I well recall pro-aborts smirking under a placard that claimed “If men could become pregnant abortion would be a sacrament.” Now Palin has given sociology professors an incontestable example of contempt for religion on the American right.

May my readers join me in offering a short Pater in reparation for both.

For those who missed it, here’s the video of that portion of Governor Palin’s speech:

UPDATE: Fr. Z is calling for an apology:

It may have just been a slip of judgment in a moment of enthusiasm, but hope that she apologizes.

I also hope that there may be a moment when, after deeper reflection about baptism, she will recall that she was baptized into the Catholic Church.

Governor Palin is wrong. Terribly wrong. But the flip reference to the sacrament of baptism is the lesser offense. Torture is wrong.

April 29, 2014 UK bishop shuts down deacon's blog
Browse Our Archives
get the latest from
Catholic
Sign up for our newsletter
POPULAR AT PATHEOS Catholic
1