Controversy continues in Charlotte, as diocese embarks on capital campaign

From The Charlotte Observer:

The Catholic Diocese of Charlotte, whose flock is more than 10 times larger than when the diocese was created in 1972, has embarked on a $65 million fundraising campaign that organizers say would address an increased demand for services and sacred space that shows no signs of letting up as more Catholics relocate here. 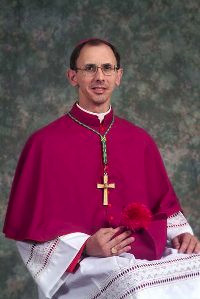 The campaign is by far the most ambitious in the history of the 46-county diocese. And if the goal is reached, the money would be used for, among other things, renovating Catholic schools, expanding Catholic charities, shoring up the priest retirement fund, boosting building plans, and ramping up ministries geared to the growing immigrant population – especially Hispanics. They make up about half of the more than 340,000 Catholics in the diocese.

Catholicism is now the largest single religious denomination in Mecklenburg County, which has 15 Catholic churches.

But at a time when Charlotte-area Catholics appear divided over the conservative leadership style of Bishop Peter Jugis, 57, the campaign could be imperiled – at least in Mecklenburg County, home to the diocese’s three largest parishes.

Many parents of Charlotte Catholic High students are still angry over his and the diocese’s handling of two recent controversies at the school, including last week’s resignation of popular principal Jerry Healy. That came amid questions about the school’s financial accounts.

And some well-heeled parishioners are boycotting the campaign to protest a $4 million earmark for additions at St. Patrick Cathedral in Dilworth – the bishop’s church – that they call a wasteful throwback to a traditionalist Catholicism that’s out of step with Pope Francis’ calls for more humility and less pageantry.

The focus of their ire: Plans to build a crypt, a part of the church used for burial of bishops, and an additional dressing room, or sacristy, this one reserved for the bishop to put on his vestments before Mass at St. Patrick. Currently, Jugis, like his predecessors, “vests” at the rectory next to the church.

The money for these and other additions at St. Patrick would be paid for, through the campaign, by donors from all over the diocese because the cathedral is the diocese’s “mother church.” But, unlike most of the diocese’s other parishes, St. Patrick is so committed to Old Church traditions that it does not allow girls to be altar servers and permits only priests and deacons – all of them men – to distribute Communion. Women do serve as lectors, or readers of the liturgy.

“We are appalled that the participation of women on the altar is disallowed in our cathedral,” Alex and Linda Sanchez, members of St. Peter Catholic Church in uptown Charlotte, wrote in a letter to parish and diocesan offices.

May 26, 2014
Check this out: one parish's own news show—and this place is a hotbed for vocations
Next Post

May 26, 2014 Is it appropriate to display the American flag in church?
Browse Our Archives
get the latest from
Catholic
Sign up for our newsletter
POPULAR AT PATHEOS Catholic
1