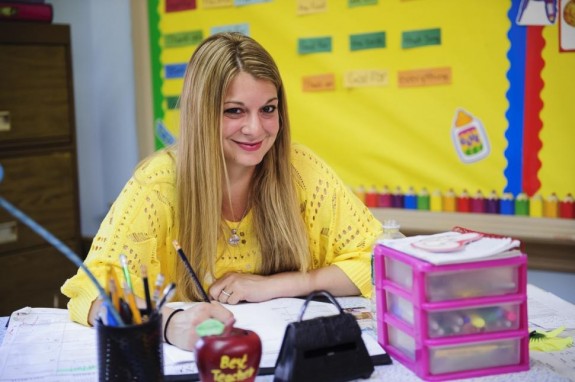 She’s good with chalk and ink.

This Bensonhurst preschool instructor has managed to bridge the seemingly distant worlds of teaching and tattooing.

Jeanine Susca, 29, a teacher at St. Athanasius Elementary School on Bay Parkway, also runs a tattoo shop with her husband on 13th Ave., inking clients on weekends and full-time during the summers.

The first-year educator, who looks the opposite of a typical, heavily inked tattooist, has been engraving her religious and floral designs for the past five years at Liquid Expression Tattoos, the shop she and her husband, Vito, opened together.

“It’s the best of both worlds,” she said. “I get to be with young, creative kids all day who are full of life and energy, and then on weekends it’s just a completely different side of the spectrum.”

…She brings her skills from the shop into the Catholic school classroom through some kind of arts-based, hands-on lesson for her class of 21 tots.

“Religious tattoos are very big in this area,” she said. “So sometimes I’ll take the religious stencils that people have for tattoos and I’ll use them in the lesson for the kids and maybe have them color it in or make their own version of it.”

Inevitably, the question arises: what does the Catholic Church teach about tattoos?

In the article “Physical Graffiti: Tattoo You” in Envoy Magazine issue 7.4, Deacon Robert Lukosh from the Archdiocese of Portland wrote that tattoos are morally permissible as long as they respect the dignity of the person:

“Body art as a form of adornment, that is ordered to the ultimate good of the person and to humanity, if it observes modesty and avoids vanity, and if it respects the fundamental integrity of the human person—including the integrity of the body—can be morally permissible.”

However some argue that Scripture prohibits tattoos in the Old Testament book of Leviticus: “Do not lacerate your body for the dead, and do not tattoo yourselves. I am the LORD” (19:28).

“Not exactly,” according to Mark Hart of Life Teen International, who’s affectionately known as the Bible Geek. Hart explained that this verse referred to the ancient mourning practices of the Canaanites that were forbidden for the Israelites. The law was meant to communicate to people that mourning wasn’t necessary if they believed in God’s salvation. It also sought to prevent people from hurting themselves (tattooing could be deadly back then).

“It’s not altogether correct to say a blanket statement like ‘tattoos are against God’ or are ‘anti-Biblical’ because they’re not,” Hart said, adding that the decision of a tattoo goes beyond what the Bible says about it and should be taken seriously.

Hart said some of the holiest people he knows have ink.

“We have to be able to look beyond the exterior… The saints of today are not going to look like the saints of 200 years ago.”

Read more on the subject.

May 31, 2014
Mass in the Extraordinary Form at a Brooklyn church—UPDATED
Next Post