History: one Mass, three generations of clergy at the altar—and a fourth serving his first Mass

History: one Mass, three generations of clergy at the altar—and a fourth serving his first Mass June 2, 2014 Deacon Greg Kandra

I posted on this extraordinary event in San Francisco over the weekend: three generations of clergy in one family.  Below is the picture to prove it. 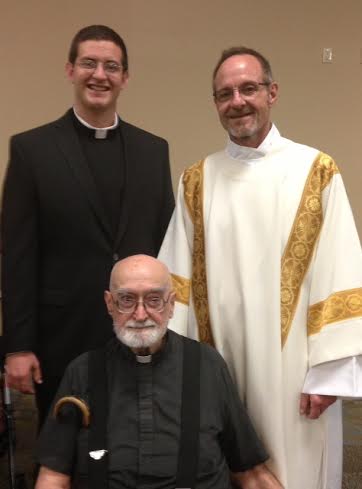 Check your archives, folks, because as far as anyone knows, it’s the first time there have been three living generations of Catholic clergy in one family—let alone, at one Mass.

The two priests—a grandson and his grandfather—concelebrated the deacon’s Mass of Thanksgiving on Sunday.

And, in fact, there was a one more generation involved, as David wrote in an e-mail this morning:

A 4th generation family member was also in the sanctuary as my grandson Vinny served his first Mass (he is 7) so he was there along with me, his grandfather, as well as his priest-uncle and his priest-great-grandfather. Though I proclaimed the wrong gospel (Year B instead of Year A!) my first homily went well and son said it was a home run.

June 2, 2014 Doesn't anybody sing in church anymore?
Browse Our Archives
get the latest from
Catholic
Sign up for our newsletter
POPULAR AT PATHEOS Catholic
1