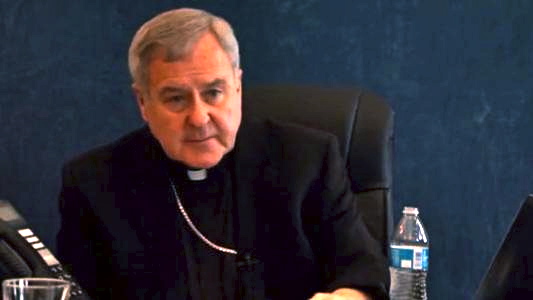 This morning, the Archdiocese of St. Louis released the statement below on its website, responding to reports and criticism surrounding Archbishop Robert Carlson’s deposition that was released Monday:

This statement is intended to clear up confusion generated by the release on June 9, 2014, of a videotaped deposition of Archbishop Robert J. Carlson, Archbishop of St. Louis. This deposition was taken in a lawsuit for damages pending in a Minnesota state court relating to events that occurred more than 30 years ago in Minnesota. Neither Archbishop Carlson nor the Archdiocese of St. Louis is a party to this case. Further, the Archbishop has been previously deposed by the same Plaintiff’s counsel on at least three separate prior occasions in the 1980s focused on the activities of the same priest that he was again asked about last month – 27 years later. Recent inaccurate and misleading reporting by certain media outlets has impugned Archbishop Carlson’s good name and reputation.

During a press conference held on June 9, 2014, Plaintiff’s lawyer strategically took Archbishop Carlson’s response to a question out of context and suggested that the Archbishop did not know that it was a criminal offense for an adult to molest a child. Nothing could be further from the truth.

Contrary to what is being reported, Archbishop Carlson is and has been a leader in the Church when it comes to recognizing and managing matters of sexual abuse involving the clergy. As far back as 1980, then-Father Carlson wrote “This behavior cannot be tolerated” in a memo referencing a priest’s abusive actions (Exhibit 301 of this case).

Q. Well, mandatory reporting laws went into effect across the nation in 1973, Archbishop.

Charles Goldberg, attorney representing Archbishop Carlson at this deposition, explained that while current Minnesota law makes it a crime for clergy persons not to report suspected child abuse, that statute did not become effective until 1988. What Plaintiff’s counsel has failed to point out to the media is that Mr. Goldberg himself noted at this point in the deposition “you’re talking about mandatory reporting?” (emphasis added). When the Archbishop said “I’m not sure whether I knew it was a crime or not,” he was simply referring to the fact that he did not know the year that clergy became mandatory reporters of suspected child abuse (pgs. 108-109).

At another point in the deposition, the Plaintiff’s counsel attacked Archbishop Carlson about the answer “I don’t remember,” to which the archbishop’s legal counsel objected:

Q. [Plaintiff’s Counsel] Can you tell me today that you have no memory of ever having advised anybody to report to the police…?

MR. GOLDBERG: Just a minute. I’m going to register an objection to that question. As I mentioned at the outset…you personally, Mr. Anderson, have deposed Archbishop Carlson on June 21st, 1985; March 30th, 1987; April 2nd, 1987; and May 4th, 1987 about each of these matters in some detail of which you had over 30 exhibits marked in those depositions, and I think in fairness to the Archbishop, if you want to ask him about these things and get specific answers, he needs to see these documents, because no human being can be expected to remember, regardless of how outrageous some of these matters may have appeared, to explain in detail those things to you without a reference to these depositions 25 to 30 years ago (pg. 19).

On page 22 of the transcript, Plaintiff’s counsel questions the Archbishop, who had repeatedly requested and was denied the ability to review case documents pertaining to the questions asked of him, and who, 27 years after last being deposed, is now being maligned for his inability to recall certain events.

To reiterate, Archbishop Carlson is not a party in this case, nor has he committed a crime. He has not only voluntarily participated in this legal process, he has offered his testimony as clearly and thoughtfully as possible, given both the span of time in which this discovery process has taken place and accessibility to certain documents.

The media reports of this deposition have not only called into question the exemplary record Archbishop Carlson has amassed during his more than 40 years of ministry, but has also reopened the wounds of survivors of the heinous act of sexual abuse, and has caused further pain to the Catholic Faithful, both here in the Archdiocese of St. Louis and beyond. These misleading and inaccurate reports have also resulted in negative commentary both in traditional as well as social media outlets. Nevertheless, the fact remains that Archbishop Carlson and the Catholic Church abhor any form of sexual abuse.

As noted in my previous post, the full transcript of the deposition can be read here.

June 10, 2014
What we have come to: bulletproof blankets for kids to wear during school shootings
Next Post

June 11, 2014 On the use of cameras during Mass
Browse Our Archives
get the latest from
Catholic
Sign up for our newsletter
POPULAR AT PATHEOS Catholic
1