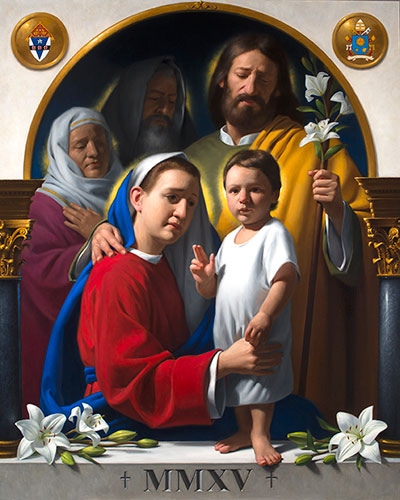 The striking image, shown here, is the work of artist Neilson Carlin. It’s a rare depiction of three generations of Christ’s family—all with eyes fixed on Jesus, whose own eyes are fixed on us, the viewer.

Visit his website to learn more about some of the beautiful religious images he’s created. There’s a very good profile of him from last summer at CatholicPhilly.com, in which he says:

“I look upon the studio as a cloister…At the altar of my easel, paint and canvas are sacraments through which I bring my congregation of viewers into communion with the sublime.”

More details, from the Archdiocese of Philadelphia:

Archbishop Charles J. Chaput, O.F.M. Cap. today unveiled the official prayer and iconic image for the World Meeting of Families – Philadelphia 2015, which is set to be held next September. Inspired by the conference theme, “Love is our mission: the family fully alive,” which was announced in May 2014, the conference’s prayer and iconic image were unveiled and blessed by Archbishop Charles J. Chaput, O.F.M., Cap. during the Sunday evening Mass at the Cathedral Basilica of Saints Peter and Paul. Both the prayer and the image will be shared with the Pontifical Council of the Family at the Vatican during Archbishop Chaput’s visit to Rome during the week of September 15.

“The prayer and iconic image will inspire everyone as we continue to prepare for the 2015 World Meeting of Families,” said Archbishop Chaput. “With their focus on enriching and reenergizing the spiritual life of families – both Catholic and non-Catholic alike, I’m hopeful that this prayer and image can help all of us to examine our minds and hearts and deepen our relationships with God and our families in meaningful ways.”

The official prayer for the World Meeting of Families – Philadelphia 2015 is meant to aid delegates around the world in their spiritual preparation for this momentous event. Distributed to parishes across the Archdiocese of Philadelphia and also accessible via the 2015 World Meeting of Families’ web site in 18 languages including American Sign Language, the prayer is meant to serve as a vehicle of hope and faith for families. Encouraging daily recitation for the success of the event and for personal intentions, the prayer is foundational to both the conference’s theme and its planned content.

In addition to an official prayer, the World Meeting of Families – Philadelphia 2015 has produced a definitive iconic image for the event. This image is a religious work of art meant to encourage both reflection and prayer. For the 2015 World Meeting of Families, artist Neilson Carlin, based in Kennett Square, PA, was commissioned to create an oil painting of the Holy Family depicting Mary, Joseph and Jesus, as a small child, as well as Mary’s parents, Saints Anna and Joachim. The four-by-five foot canvas, which was also unveiled on Sunday with the assistance of students from John W. Hallahan Catholic Girls’ High School, Roman Catholic High School, Saint Peter the Apostle School, and Saint Francis Xavier School, will be on display in the Cathedral Basilica of Saints Peter and Paul through the conclusion of the World Meeting of Families, which will be held September 22-27, 2015. Those coming to the view the iconic image at the Cathedral are encouraged to pray for families around the world by reciting the official prayer and lighting a votive candle at the Marian Shrine.

Carlin, who specializes in large-scale commission work for the Catholic Church, said, “I am both honored and humbled by the opportunity to use my talents to serve the Church, my fellow Catholics and this global event, which hopefully will welcome Pope Francis. Inspired by the theme of ‘Love is our mission,’ it is my sincerest hope that this image will be a source of prayer and contemplation that draws people of all faiths in and ultimately makes them feel closer and more connected to their own families.”

For more information about the World Meeting of Families – Philadelphia 2015, its official prayer or the iconic image for this international event, please visit worldmeeting2015.org.

God and Father of us all,
in Jesus, your Son and our Savior,
you have made us
your sons and daughters
in the family of the Church.

May your grace and love
help our families
in every part of the world
be united to one another
in fidelity to the Gospel.

May the example of the Holy Family,
with the aid of your Holy Spirit,
guide all families, especially those most troubled,
to be homes of communion and prayer
and to always seek your truth and live in your love,

through Christ our Lord. Amen.

Jesus, Mary and Joseph, pray for us!

September 8, 2014
Was Jesus more like Jon Stewart? Those parables may not be what you thought
Next Post

September 9, 2014 Of prodigals and parades: Elizabeth Scalia nails it
Browse Our Archives
get the latest from
Catholic
Sign up for our newsletter
POPULAR AT PATHEOS Catholic
1