Of prodigals and parades: Elizabeth Scalia nails it 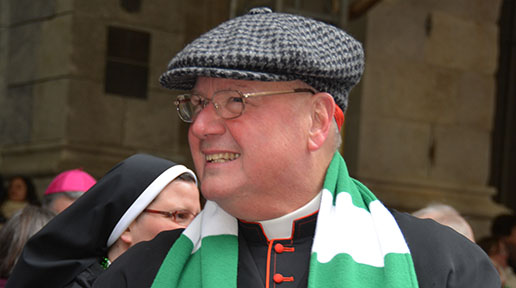 The Anchoress today takes a thoughtful look at the controversy swirling around Cardinal Dolan and the St. Patrick’s Day parade and takes sides—but it’s the side of Christ.

What about a bishop agreeing to be Grand Marshall in a Saint Patrick’s Day parade wherein homosexual groups — yes, even the sort of lobbyist homosexual groups over which Pope Francis expressed concern — will be included among the participants?

That’s pretty bad, right? For some it is causing scandal and confusion and calumny and they are loudly suggesting — in a way Jesus never would — that the bishop should repent, apologize, express contrition (things Jesus didn’t demand of the adulterous woman) and then resign his office. They want him to literally remove himself from the area, before his uncleanliness renders everyone else unclean.

Well, the Saint Patrick’s Day Parade has, at least in New York City, long been a trooping of the sinners, but let’s think for a moment about those muddy circumstances, again, and the story Jesus told, the parable of the Prodigal Son.

Recall, the wastrel son of a rich man asked for his inheritance, and then he squandered it so thoroughly that he was stuck feeding the pigs, and growing hungry. The son thought,

“How many of my father’s hired workers have more than enough food to eat, but here am I, dying from hunger. I shall get up and go to my father and I shall say to him, ‘Father, I have sinned against heaven and against you. I no longer deserve to be called your son; treat me as you would treat one of your hired workers.”’

So he got up and went back to his father. While he was still a long way off, his father caught sight of him, and was filled with compassion. He ran to his son, embraced him and kissed him.

Reread the last two sentences. It didn’t matter why the son was seeking inclusion; the father did not know whether he was coming home repentant or full of swagger. Motivation did not matter. All the father knew was that the son had made a move toward home, and it was enough to send the father running out, to meet him.

I’m not sure a bishop has a choice but to run out to meet prodigals, regardless of motivating factors. The father wants everyone to come home and be with him. Once they’re at the doorstep, they may be encouraged to come in; once they’re inside, they can be talked with, nurtured, fed, encouraged, formed, and made whole. This cannot happen as long as they are off in the faraway places.

Later in the story, the older son — obedient and responsible — feels shortchanged and resentful, because the father has been so welcoming of the wastrel while barely noticing the elder son’s daily toil. And what does the father do? He goes out to his elder son, to reassure him that his faithfulness is seen and known. He tells him, “everything I have is yours” even while urging him to make his returning brother welcome.

Because only in this way can his family eventually become whole, and holy.

So yeah, the bishop has some work to do; he cannot ebulliently run out to meet the disobedient ones without also warmly seeking out the obedient ones, and soothing their resentment — letting them know that they too are seen, heard and yes, fully welcome.

There’s much more, and I’d encourage you to read it all. There’s a lot for all of us to ponder and pray over.

September 9, 2014 An answered prayer: a dying man is ordained a deacon and priest
Browse Our Archives
get the latest from
Catholic
Sign up for our newsletter
POPULAR AT PATHEOS Catholic
1