They do: Pope marries 20 couples in St. Peter’s 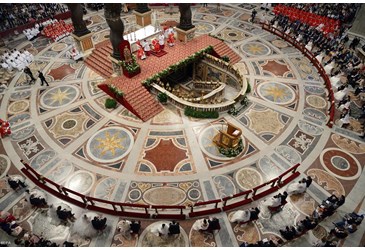 To the simple strains of a harp, twenty grooms made their way up the central nave of St Peter’s Basilica with their mothers, followed by twenty brides dressed in white accompanied by their fathers.

All of the couples were from the diocese of Rome and had come to be married, on the Feast of the Exaltation of the Holy Cross, by the Pope himself.

In his Homily, which preceded the Rite of Marriage, the Holy Father, taking his cue from the morning’s readings offered a real or non-fictional, as he called it, view of married life.

He said, that in the first reading from the Book of Numbers, we can imagine families led by Moses journeying through the desert. Families he noted, “are the first place in which we are formed as persons and, at the same time, the “bricks” for the building up of society.”

But just like in Sunday’s liturgy, families and indeed spouses, the Pope said, can become “impatient on their journey of conjugal and family life.

“The hardship of the journey he added, causes them to” experience interior weariness; they lose the flavour of matrimony and they cease to draw water from the well of the Sacrament.  Daily life becomes burdensome, even “nauseating”.”

Pope Francis explained that the cure for those couples who have succumbed to the dangerous temptation of discouragement, infidelity, weakness, and  abandonment, is the love of Christ.

It is that love, the Holy Father stressed, “which has blessed and sanctified the union of husband and wife, and is able to sustain their love and to renew it when, humanly speaking, it becomes lost, wounded or worn out.

He also underlined that marriage is a demanding journey, it is not “fiction”! “ It is the Sacrament of the love of Christ and the Church, a love which finds its proof and guarantee in the Cross.”

He concluded his Homily with some advice to the couples, reiterating that if a couple argues they should never end the day without making peace with each other.

With the attention again focused on the twenty couples seated before the Pope, each bride and groom exchanged wedding vows . Then in what was an emotional moment for many of them, they exchanged rings taken from a cushion embossed with Pope Francis’ coat of arms.

As the celebration concluded there was a round of applause for the newlyweds as they made their way out of the Basilica to the sounds of an organ fanfare.  It was then on to the Vatican Gardens for those all-important photos from an unforgettable day in which they will be able to tell their children and grandchildren they were married by a Pope.

The BBC, meantime, spotlights some key details that have raised eyebrows:

One of the couples married was a man whose previous marriage was annulled and a single mother with a daughter from a previous relationship.

Pope Francis told the couples at the two-hour ceremony that marriage was “not an easy road, it’s sometimes a contentious trip, but that’s life,” AFP news agency reports.

Very slowly, the church under the guidance of Pope Francis is facing the fact that many Catholic couples cohabit before marriage, use contraception freely and divorce and remarry without seeking an annulment, says the BBC’s David Willey in Rome.

He said in his homily that families are “bricks that build society”, but also believes that the church should forgive those who have sex outside marriage or who don’t obey church teaching to the letter.

It was the first marriage Pope Francis has conducted in his 18-month papacy. The last wedding to be presided over by a pope took place under John Paul II in 2000.

September 14, 2014 "Every priest continues to be a deacon...for the Lord Himself became our minister, our deacon"
Browse Our Archives
Related posts from The Deacon's Bench