A Canadian archbishop visited the Kansas City-St. Joseph, Mo., diocese last week on behalf of the Vatican to investigate the leadership of Bishop Robert Finn, the first Catholic prelate to be found criminally guilty of shielding a priest in the ongoing clergy sexual abuse crisis. 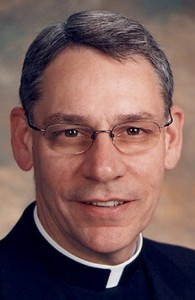 According to those who spoke with Prendergast, the main question he asked was: “Do you think [Finn] is fit to be a leader?”

The communications officer for the Ottawa archdiocese, Sarah Du Broy, said the archdiocese did not a have comment as “the Archbishop considers it a private visit.”

The director of the Kansas City diocese’s communications office, Jack Smith, said by phone Monday he had “no personal knowledge” of Prendergast’s visit. Later, after checking with “senior leadership” in the diocese, Smith sent an email to NCR, saying, “Nobody has heard of this.”

Smith said Finn is in Rome for deacon ordinations of several of the diocese’s seminarians studying at the Pontifical North American College.

Prendergast, according to those who spoke to him, said he was visiting the diocese on behalf of the Vatican’s Congregation for Bishops, which makes recommendations to the pope on the appointment of bishops around the world.

Finn, who has led the Kansas City diocese since 2005, has come under sustained criticism in the diocese, especially following his conviction in September 2012 of a misdemeanor count of failing to report suspected child abuse in the case of a now-former diocesan priest who was producing child pornography.

An investigation of a diocese by another bishop, known formally as a visitation, normally occurs when the pope or one of the Vatican’s congregations have concerns about the leadership of the diocese.

A former chancellor of the Kansas City diocese also confirmed to NCR Monday the ongoing investigation, saying he had helped in an effort to have a Vatican review of Finn’s leadership.

UPDATE:  Late today, I got an email from the Director of Communications for Kansas City-St. Joseph, who explained that he hadn’t had a chance to speak to the bishop, since he’s in Rome for the ordinations. He added:

I did just now speak with the bishop…Bishop Finn was notified of the process in advance by the Apostolic Nuncio. He cooperated with the process and was obligated by the terms of the visitation not to speak of it to anyone, including his senior staff and communications director.

September 29, 2014 Muslims rally in Paris to protest ISIS; Muslim leaders issue condemnation of violence
Browse Our Archives
get the latest from
Catholic
Sign up for our newsletter
POPULAR AT PATHEOS Catholic
1