Great moments in journalism: you decide, we report 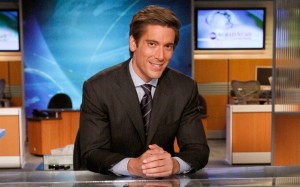 Evidently it is the viewing public—which this morning is trending stories on Facebook about a man eaten alive by a snake and Bobby Moynihan’s performance as Princess Leia on SNL—which is helping determine news content.

According to participants who tweeted David Muir’s comments, he believes social media has allowed viewers to have unprecedented involvement in making “World News” the kind of newscast they want. “I like the idea of handing over the power to them,” he said. “What’s fascinating is that our viewers are dictating where we take the stories.”

Muir does not see social media platforms like Twitter as a means of driving viewers to watch the legacy newscast. Instead, he says, “It’s to signal to them I’m like you, and hopefully you’re like me.”

December 8, 2014 Believe it or not: in seven states, you must believe in God to hold public office
Browse Our Archives
get the latest from
Catholic
Sign up for our newsletter
POPULAR AT PATHEOS Catholic
1

Anyone Want to Volunteer Unto Death?
Volunteer, anyone?   Matthew 22:34-40 for the Thirtieth Sunday in Ordinary...
view all Catholic blogs
Copyright 2008-2020, Patheos. All rights reserved.