Serving at table: the deacon who used to be the chef for Cèline Dion

I love this story, from The Catholic Review in Baltimore:

If you’re looking for a unique, Maryland-related gift for Christmas, perhaps the place to start is at a parish gift shop, such as the one nestled into the Sexton’s Lodge at America’s first cathedral.

Next to the Basilica of the National Shrine of the Assumption of the Blessed Virgin Mary, a small gift store beckons visitors to the historic church. In addition to the CDs of the basilica’s choir, and authentic “Baltimore Basilica” baseball caps, shoppers can find a poultry spice rub created by a deacon. 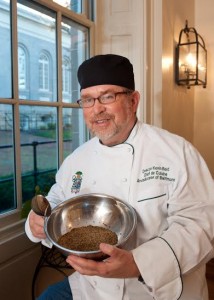 Deacon Kevin Reid, who splits his time between duties as deacon liaison for the Office of Clergy Personnel and as chef de cuisine for archdiocesan events, developed “The Deacon’s Poultry Rub,” a blended spice that when rubbed on the outside of poultry to be roasted, grilled or pan-fried infuses the flavor into the meat.

“These days a lot of chefs are coming up with their own rubs,” Deacon Reid said. “In essence it’s a dry marinade. I’ve taken a bunch of different herbs, including parsley, sage, rosemary and thyme. They’re all in there.”

Deacon Reid, who along with a crew of helpers does the cooking, serving and clean-up for big dinners hosted by Archbishop William E. Lori and other archdiocesan departments, has been cooking for more than 45 years. He plans the menus, and prepares everything from appetizers to desserts.

Trained at the Culinary Institute of America, he was a personal chef for Cèline Dion when she lived in Florida, and has worked up and down the East Coast. He also served as executive chef for the medical center at Johns Hopkins University, overseeing the service of 10,000 meals a day.

These days, he loves the fact that he can combine his diaconal ministry with his skills in the kitchen. During Mass, he said, after the creed, “The deacon prepares the table at the altar. … I administer at both tables – the table of God and the table of man.”

Photo from the Baltimore basilica