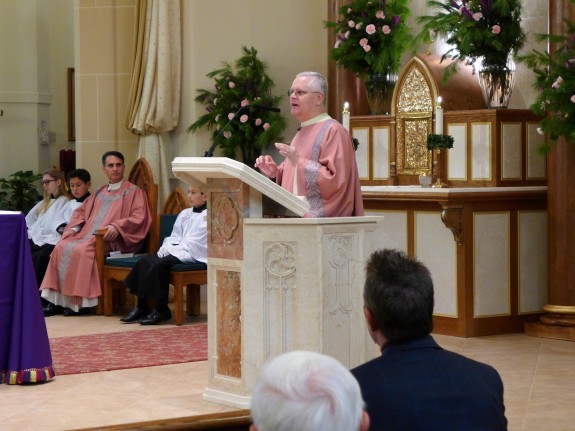 A certain deacon, preaching “in the presence of priest,” on Gaudete Sunday.

The noted priest offers some thoughts on preaching in Aleteia:

Preaching will be inadequate if it is an afterthought or incidental to the liturgy. It never occurred to the Fathers of the Church that preaching was anything other than the chief duty, Primum Officium, of the Sacred Priesthood,  as affirmed by the Council of Constance and the Council of Trent. The old Code of Canon Law called the homily  a “legitimate interruption” of the Mass, but Benedict XV and Pius XII formally declared otherwise. The preaching of the Gospel leads the faithful to the sacramental life, just as preaching outside the Liturgy, as a “proto-evangelion” is meant to convert others to the Faith.

Vatican II emphasized what always was present in this understanding, and the great pulpits of the Counter-Reformation architecture show the  importance of preaching the Word.  Christ is uniquely present in the Blessed Sacrament, but that patron of parish priests, St. John Vianney, said that he did not know which was worse: to not pay attention to the preacher or to let the Blessed Sacrament drop to the floor. St. Francis de Sales understood preaching as a form of prayer and said that it must be preceded not only by remote and immediate preparation, but also by meditation. Blessed Teresa of Calcutta told me once after Mass, perhaps as a gentle correction, that the preacher should pray and then tell the people what Jesus had told him. Blessed is the preacher who could be on her kind of wavelength! Yet so high was her appreciation of the priestly character of preaching that she never would have dreamed of preaching in the Liturgy. The same was said of St. Francis of Assisi. While Church law permits deacons to preach by exception during the Liturgy, diaconal preaching is essentially non-liturgical and catechetical.  As a deacon, St. Francis would never preach in the presence of a priest.

Preaching has widely become rather moralizing and edifying rather than doctrinal. Even back in the depths of World War I, when Belgium was being crucified, the great Cardinal Mercier thought it important to reprimand priests for telling the people to love but not explaining why they should love.

Another problem is the failure to distinguish kinds of preaching. As there are preludes, sonatas, and symphonies, so preaching has different forms. Some preaching is liturgical  (homilies) and other kinds are devotional and also catechetical (sermons). Sermons may be longer than the homily. At Mass, some homilies are too short and some are too long. Once when Lord Melbourne told a curate that his sermon was short, the young cleric said, “I did not want to be tedious,” to which Melbourne replied, “But you were tedious.” Like music, the length should not overwhelm the ritual, nor should it be only a pious hiccup or an intermission for entertainment.

For clarification: An alert deacon reader pointed me to these passages in canon law:

Can. 764 Without prejudice to the prescript of can. 765, presbyters and deacons possess the faculty of preaching everywhere; this faculty is to be exercised with at least the presumed consent of the rector of the church, unless the competent ordinary has restricted or taken away the faculty or particular law requires express permission.

Can. 767 §1. Among the forms of preaching, the homily, which is part of the liturgy itself and is reserved to a priest or deacon, is preeminent; in the homily the mysteries of faith and the norms of Christian life are to be explained from the sacred text during the course of the liturgical year.

1570 Deacons share in Christ’s mission and grace in a special way. The sacrament of Holy Orders marks them with an imprint (“character”) which cannot be removed and which configures them to Christ, who made himself the “deacon” or servant of all. Among other tasks, it is the task of deacons to assist the bishop and priests in the celebration of the divine mysteries, above all the Eucharist, in the distribution of Holy Communion, in assisting at and blessing marriages, in the proclamation of the Gospel and preaching, in presiding over funerals, and in dedicating themselves to the various ministries of charity.

UPDATE: Canon lawyer Ed Peters offers his own perspective over at his blog:

A few of Rutler’s comments (in italics below) seem odd.

“The old Code of Canon Law called the homily a ‘legitimate interruption’ of the Mass … ” Where did the 1917 Code say that? Canons 1337-1348 of the old Code treat preaching in general and homilies in particular but I see no language in those canons suggesting that homilies are “interruptions” of the Mass. Laver’s Index Verborum does not show the words “homilia” or “interruptio”, etc., being used together in any canons of the old Code.

“ … but Benedict XV and Pius XII formally declared otherwise.” Again, assuming such a declaration was needed, where did these popes say that? In the only two places wherein modern canon law invokes Pius XII on homilies (it does not draw on B15 at all), homilies are not described as interruptions of the Mass. More than one Pio-Benedictine canon, however, imposes an obligation to offer homilies at most Masses (Canons 1344-1345).

“The great pulpits of the Counter-Reformation architecture show the importance of preaching the Word.” Maybe. But they surely show that most of the Mass was not celebrated so as to be heard by the faithful, this in contrast to the homily, which was typically delivered in the vernacular. In an age without electronic amplification, assisting the voice of the homilist or preacher by moving pulpits into the nave made practical sense.

…Canon law does not prefer priests to deacons in preaching at Mass (Canons 764, 767), though liturgical law favors the celebrant (by definition, a priest) over a deacon for the homily. See Ecclesiae de Mysterio (1997), art. 3, § 3, and GIRM (2010) 66. That does not imply, however, that diaconal preaching at Mass is “non-liturgical” (nor that priestly preaching outside of Mass is “liturgical”); rather, this presbyteral preference respects the hierarchical nature of the Church in much the same way that the rubrics for some sacramentals prefer priests to deacons and deacons to lay persons in their celebration.

January 7, 2015 Africa's "Catholic moment"
Browse Our Archives
get the latest from
Catholic
Sign up for our newsletter
POPULAR AT PATHEOS Catholic
1