One seminarian’s journey: “I was angry with God. I told him, ‘I hate you. I don’t want to believe in you.'” 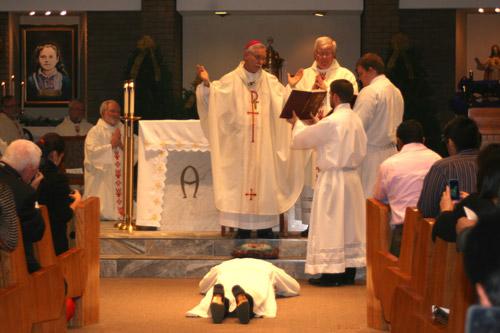 When he was around 12 years old, Luis Miguel Pacheco, a frustrated, suffering kid in Mexico, told God he hated him. Just 16 years later, God changed his heart and is working through him to serve the Church.

Pacheco, a 28-year-old seminarian, celebrated his diaconate ordination with Bishop Anthony B. Taylor at St. Theresa Church in Little Rock Dec. 17. Pacheco will be serving as a deacon at Immaculate Conception Church in North Little Rock.

At the ordination Pacheco professed his faith and loyalty to the Church and his desire to be a priest. He will be allowed to preside over some sacraments, including baptism and weddings.

He is scheduled to be ordained a priest May 28, 2016, at Christ the King Church in Little Rock.

Pacheco’s journey to his diaconate ordination, a step toward his priestly vocation, was nurtured by his mother’s prayers for her son to “serve God,” he wrote for his autobiography on dolr.org.

“I was in a car accident when I was 2 years old. The accident was very terrible for my parents and me because I was the youngest of seven siblings. This accident caused me to be in a coma for four months. The doctors thought I was done — that I would not live,” Pacheco wrote. “But God made a miracle and, with Our Lady of Guadalupe, restored my life and allowed me to walk again.”

Pacheco was faced with difficulties in walking, talking and seeing — even now, seeing with his right eye is a challenge, he said.

As he grew up, his family — parents Miguel Pacheco and Pascuala Calero, four brothers and two sisters who lived in Telixtac, Morelos, Mexico — did not attend Mass with him. But he has fond memories of being a 6-year-old altar boy, going to Mass each Sunday and helping people.

“I started my vocation when I was a kid, when I was 6 years old. I always went to the Mass and I went to help the people and I was serving on the altar. It was very happy,” Pacheco said.

But the effects from being in a coma for four months after the accident lingered throughout his early years and after watching countless people who did not attend church or live a Christian life, yet did not endure the same suffering, Pacheco said he had enough with God. Before school one morning when he was around 12 years old, he went to the local chapel.

“I was really angry, angry with God. I told him, ‘I hate you. I don’t want to believe in you,’ Pacheco said. “You give me the cure, you give me a miracle, I want to follow you, whatever you call me (to do). Please show me if you exist. I want to see you I want to believe.”

January 9, 2015 RIP, Andraé Crouch
Browse Our Archives
get the latest from
Catholic
Sign up for our newsletter
POPULAR AT PATHEOS Catholic
1