Jessica Wilson got married five months before she graduated from an evangelical college in 2010. Because she believed that sex is reserved for marriage, it wasn’t much earlier that she had started thinking about what kind of birth control to use. No one in her family or her church had ever questioned the idea of contraception, but they hadn’t taught her much about it, either.

Eventually she came upon the writings of Randy Alcorn, an author and activist who promotes the idea that hormonal birth control, like the pill and some intrauterine devices, sometimes works as an abortifacient by preventing the implantation of a fertilized egg. Alarmed, she decided she couldn’t take that risk, especially since she had already heard horror stories from friends who said the pill made them gain weight, diminished their sex drive or caused depression. She began charting her menstrual cycles, haphazardly at first, and when she got married she used a diaphragm with spermicide when she thought she was ovulating. All three of her pregnancies, including those that resulted in a son and daughter born 15 months apart, were unplanned, but she says she has no regrets. 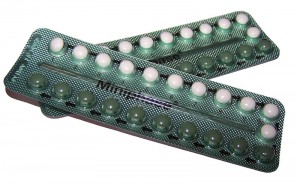 “I have seen a lot of people [questioning] the idea in our culture that couples deserve to have five years of freedom before they have kids or this unwritten code that all Americans should have two boys and a girl and then they’re done,” she said. “Why are we buying this idea that we shouldn’t have kids?”

Surveys indicate that the vast majority of both Catholic and Protestant married women have used or are currently using contraception. But Wilson is part of a conversation percolating among some adherents of both traditions, most of them educated and conservative, that suggests a growing moral discomfort with birth control. These are not like the Duggar family (of reality television’s “19 Kids and Counting”) who believe that constant childbearing is a Christian obligation, and not all of them reject birth control wholesale. Some simply don’t like the idea of interfering with a woman’s natural bodily rhythms, or they fear, like Wilson, that hormonal contraception has the potential to cause very early abortions. And others share a broader concern: that the underlying logic of contraception suggests couples can, and should, rigidly control their fertility — and that children are not a blessing, but a burden to be avoided.

Among conservative Protestants, these are sprouts of doubt around a topic that hasn’t been debated seriously for decades. “Contraception has been an ingrained, unquestioned, binding reality on young evangelicals,” said Andrew Walker, director of policy studies at the Southern Baptist Convention’s Ethics & Religious Liberty Commission. Growing up in the evangelical community, “there was just the assumption that you get married, you use contraception, no doubt about it.”

February 5, 2015 If you want to know whether young Catholics are pro-life, look at this
Browse Our Archives
Follow Us!

A Great Pretender
Have I wasted my dreams? Have I missed my chance? Have I...
view all Catholic blogs
Copyright 2008-2020, Patheos. All rights reserved.