This is…different: one Seattle parish on Super Bowl Sunday—UPDATED WITH VIDEO 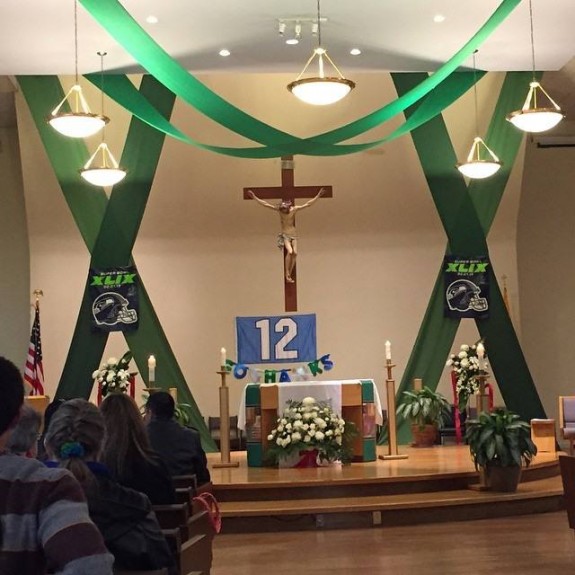 A little liturgical background, from Zenit and EWTN:

Some general norms of the Church regarding decorating the sanctuary are contained in the General Instruction of the Roman Missal, in Nos. 304 and following, which address some aspects directly regarding the decoration of the altar but whose principles may be applied to the sanctuary in general.

It may be inferred that what the Church desires with regard to the decoration of the sanctuary is an overall sense of moderation and well-balanced dignity, limiting, as far as possible, the use of merely decorative objects that have no direct liturgical function and avoidance of creating obstacles to the clear view of the assembly or impediments to its concentration on the celebration of the sacred mystery itself.

And there’s this, for those who are curious about the subject:

…Surprisingly, there are no regulations of any kind governing the display of flags in Roman Catholic churches. Neither the Code of Canon law, nor the liturgical books of the Roman rite comment on this practice. As a result, the question of whether and how to display a national or other flag in a church is left up to the judgment of the diocesan bishop, who in turn often delegates this to the discretion of the pastor. It appears that the origin of the display of the American flag in many U.S. parishes stems from the custom of offering prayers for those who served during World War II. At that time, many bishops and pastors provided a book of remembrance near the American flag, requesting prayers for loved ones — especially those serving their country in the armed forces — as a way of keeping before the attention of the faithful the needs of military families. After the war the custom of having the flag present in the sanctuary, often accompanied by the pontifical standard, continued even in periods with no major international conflicts. The practice, while not confined to the United States, is not widespread in other countries and is usually confined to certain churches of particular national importance. The Basilica of Our Lady of Guadalupe in Mexico City, for example, displays a large national flag near the image of the Patroness of America and in another part of the church the flags of all the nations of North and South America. The U.S. bishops’ Committee on the Liturgy has in the past encouraged pastors not to place the flag within the sanctuary itself, in order to reserve that space for the altar, the ambo, the presidential chair and the tabernacle. Instead, the suggestion has been made that the American flag be placed outside the sanctuary, or in the vestibule of the church together with a book of prayer requests. It remains, however, for the diocesan bishop to determine regulations in this matter.

UPDATE: You can watch a video of the Mass here.  Skip ahead to the last two minutes or so. It ends with something truly cringe-inducing: the celebrant, after pronouncing the final blessing, dons a Seahawks ski cap and throws a Seahawks blanket over his chasuble before they begin the recessional.

UPDATE II: The parish has now removed the full Mass video from its online Livestream archive.

The conclusion of the VIDEO below: 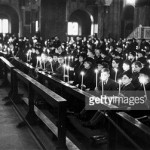 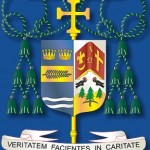