Journey to Genesee: “Those who think they have arrived have lost their way”

Journey to Genesee: “Those who think they have arrived have lost their way” June 28, 2015 Deacon Greg Kandra

I spent Saturday afternoon visiting with my sister, who lives part of the year in Geneseo, New York, about an hour’s drive southeast of Buffalo.

She arranged for us to get a private tour of a place I’ve always wanted to visit: The Abbey of the Genesee, a well-known Trappist monastery just a short drive from her home.

It was a miserable, rainy afternoon, so we confined most of our visit to the indoors.

Our guide was the delightful Brother Augustine—a.k.a., Brother Auggie.

The chapel has a rustic, earthy quality that is a marked contrast to most Trappist houses I’ve seen. Built in the early 1970s, it’s very much a product of its times. The church was renovated just last year. (You can see pictures of the project here.)

The abbot’s crozier depicts the Genesee River—with arrowheads pointing north. (Amazing fact: The Genesee is one of only a handful of rivers in North America that actually flows north.)

Above and below the wavy band of river and golden banks is a crescent, the symbol of Our Lady under the title of the Immaculate Conception. It is under this title that she is patroness of the United States.

The gift shop, of course, features a selection of Merton books—and the famousMonks Bread. My sister tells me the monks are expanding this industry and it will soon be available in Wegmans grocery stores around the country.

The great Henri Nouwen spent seven months on sabbatical at Genesee in the 1970s, helping collect the stones from the river that were used to construct the chapel. It was work he found difficult, tedious—and edifying. In his book “The Genesee Diary,” his account of that memorable year, he wrote:

“There is a contemplative way of working that is more important for me than praying, reading, or singing. Most people think that you go to the monastery to pray. Well, I prayed more this week than before but also discovered that I have not learned yet to make the work of my hands into a prayer.”

Nouwen’s work continued long after he left Genesee. So does mine. It was a wonderful visit, and I’m grateful to Brother Auggie for taking the time to show to us around. I left uplifted and happy and would love to return some day soon for a retreat.

After I got home, I found this quote of Nouwen’s from “The Genesee Diary” that I think is very Mertonesque—and quietly profound, both timeless and timely:

Top and bottom photos via Abbey of the Genesee website. All others, Deacon Greg. 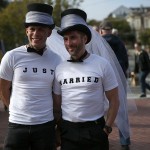 June 26, 2015
The viewpoint that dare not speak its name
Next Post

June 28, 2015 Journey to Genesee: "Those who think they have arrived have lost their way"
Recent Comments
0 | Leave a Comment
Browse Our Archives
get the latest from
Catholic
Sign up for our newsletter
POPULAR AT PATHEOS Catholic
1

Gregory Nazianzen (d. 389) vs. Sola Scriptura as...
Protestant anti-Catholic polemicists David T. King and William Webster are the editors...
view all Catholic blogs
What Are Your Thoughts?leave a comment