The source is a German newspaper. Translation is below.

Archbishop Georg Gänswein, private secretary of Benedict XVI, has rejected the claim that the emeritus Pope has confirmed the allegations of former Vatican diplomat Carlo Viganò. “Pope Benedict has not commented on the ‘memorandum’ of Archbishop Viganò and will not do so,” Gänswein told the newspaper. The claim that the emeritus Pope had confirmed the statements lacked any foundation. “Fake news!,” says Gänswein.

The archbishop refers to a New York Times report citing a board member of the American news channel “EWTN,” Timothy Busch. According to him, the emeritus Pope confirmed the allegations made in Viganò’s letter .

It’s unclear where, exactly, Gänswein made this comments, or what else he had to say.

Stay tuned. I have a feeling this ain’t over.

Meanwhile, AP has this bombshell:

An Italian journalist who says he helped a former Vatican diplomat pen his bombshell allegation of sex abuse cover-up against Pope Francis says he persuaded the archbishop to go public after the U.S. church was thrown into turmoil by sex abuse revelations in the Pennsylvania grand jury report.

…Tosatti, a longtime correspondent for Italian daily La Stampa but who now writes largely for more conservative blogs, said after their initial meeting a few weeks ago, Vigano wasn’t prepared to go public.

But Tosatti said he called him after the Pennsylvania grand jury report published Aug. 15 alleged some 300 priests in six Pennsylvania dioceses abused more than 1,000 children over the past 70 years, and that a sequence of bishops had covered it up.

Tosatti said he told Vigano: “I think that if you want to say something, now is the moment, because everything is going upside-down in the United States. He said ‘OK.’”

UPDATE: Edward Pentin is standing by his reporting. He writes:

In his comments published today in Die Tagespost, Archbishop Gänswein said he was referring to a report published yesterday in TheNew York Times.

In that article, The New York Times interviewed and quoted Tim Busch, a board member of EWTN. And in comments attributed to him, but without quoting him directly, TheTimesreported that said he told the newspaper that “leaders of the publication [the Register] had personally assured him that the former pope, Benedict XVI, had confirmed Archbishop Viganò’s account.”

Archbishop Gänswein, who is also prefect of the Pontifical Household, denied as “fake news” this assertion as reported by TheNew York Times, alleging that Benedict had “confirmed Viganò’s account.”

…The Register fully stands by its reporting, drawn on sources close to the Pope Emeritus, that sanctions were issued by Benedict against McCarrick. 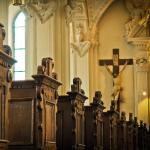 August 28, 2018
Tobin on Viganò: 'I do think it's about limiting the days of this pope...neutering his voice'
Next Post 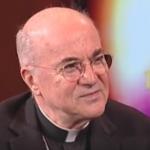 August 28, 2018 Carlo Maria Viganò: 'The man who took on the pope'
Browse Our Archives
get the latest from
Catholic
Sign up for our newsletter
POPULAR AT PATHEOS Catholic
1