The move appears to be for just nine days, but it’s part of a significant and growing trend in the American church — one that seems to acknowledge someone who rarely gets much attention from the pulpit: Satan.

Cardinal Dolan wrote about it in his newspaper column this week:

I hear from so many of you, God’s People, that we need again the weapons of prayer, reparation, and penance, ammunition the Devil dreads.

The only protection from Beelzebub is Jesus. Satan is the second most powerful force in creation. We know the first.

And Jesus assured us that He will remain with us until the end of the world. He also was blunt in acknowledging that “the gates of hell will not prevail against the Church,” although, as a wise confessor whispered to me, that does not mean they’ll ever stop trying.

Enough of you have suggested this to me that I’ve concluded it’s from the Lord: that we seek the help of St. Michael the Archangel in fighting Lucifer’s invasion of the Church. Let’s fight fire-with-fire, they recommend, the Good Angel (St. Michael) attacking the Bad Angel (Lucifer).

St. Michael’s feast day is around the corner, September 29. So, beginning Friday, September 21, the Feast of St. Matthew the Evangelist, I am asking that every Mass conclude, for nine days—a novena—with the ancient prayer requesting the Archangel’s intercession against our foe, Satan.

Here’s the prayer: please, for the nine days concluding on September 29, his feast day, conclude every Mass with this prayer. If you’re not at daily Mass during the week, say it yourself:

St. Michael the Archangel, defend us in battle;
be our defense against the wickedness and snares of the devil.
May God rebuke him, we humbly pray; and do you, O prince of the heavenly host,
by the power of God, thrust into hell Satan and the other evil spirits
who prowl about the world for the ruin of souls. Amen. 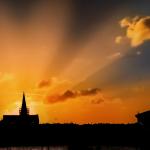 September 14, 2018
A priest writes to seminarians: 'Let's be the ones who remain'
Next Post 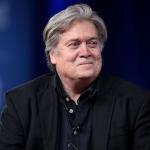 September 15, 2018 Steve Bannon drafting curriculum for Catholic institute in Italy
Browse Our Archives
get the latest from
Catholic
Sign up for our newsletter
POPULAR AT PATHEOS Catholic
1