Now, THIS is Christmas

Here’s a blast from the past.

Growing up, this was the soundtrack of Christmas. I learned the most popular holiday songs from these records, which my father would play on his big wooden Fisher stereo in the living room as we decorated the tree or opened gifts or waited for the ham to come out of the oven. It was an endless loop of Julie Andrews, Maurice Chevalier, Andy Williams, Vic Damone and the Mormon Tabernacle Choir. And it was wonderful.

So stumbling on this story and finding out you can actually buy these on CD now really gave me a nostalgia rush:

As music buyers of a certain age will remember, there was a time when these impulse purchases were tied to whitewalls, not white vanilla mochas. During the 1960s and ’70s, the Goodyear and Firestone tire companies peddled annual Christmas albums in their stores, usually for a dollar each, to customers who waited to get their tires changed or wheels aligned.

Lately, nostalgia-fueled Internet discussions have emerged around the merits and availability of these old LPs. A scan of eBay and Amazon turns up dozens of original Firestone and Goodyear LPs for sale. Part of their allure is about scarcity: these albums never made the jump to the CD or download format.

David Feinauer is the co-owner of Christmas LPs to CD, a seven-year-old family business near Cincinnati, OH that transfers old LPs to CD and MP3 formats and sells them for between $20 and $35. He said that the tire companies’ albums are consistently his top sellers, often because they contained songs not available elsewhere.

“We have people who will buy particular ones because there’s one song they want,” he said, noting how Goodyear’s “Great Songs of Christmas Vol. 8” featured a rare Tony Bennett version of “What Child is This.”

Feinauer said the tire company LPs were the brainchild of Stanley Arnold, a music industry consultant who approached Goodyear in 1961 with the idea of a “premium record,” as it was called. At first the company was skeptical, but in the first year, Columbia did 100,000 pressings of the first release for mid November. By Thanksgiving they were sold out. The next year they sold 200,000 copies. Customers were limited one per visit.

For anyone wondering what the fuss was all about, here’s a sampling from YouTube. 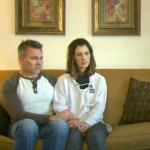 December 17, 2018
Must-read: the headline-making homily delivered after a young man's suicide
Next Post 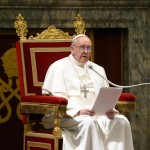 December 18, 2018 Pope: 'Political addresses that blame every evil on migrants are unacceptable'
Browse Our Archives
Related posts from The Deacon's Bench