From Patti Armstrong at The National Catholic Register:

Woodrow Wilson was president, people drove their Model Ts to see Charlie Chaplin movies, and World War I had just ended when Deacon Lawrence Girard was born on Nov. 21, 1918. Since his birth a century ago, the world has not slowed down, and neither has he — or at least not much for a century-old deacon.

Deacon Girard serves eight Masses a week at St. Sebastian Church in Dearborn Heights, Michigan — one a day and two on Sundays — reading the Gospel and intentions and helping distribute Holy Communion. According to his pastor, Father Walter Ptak, “He’s not only 100, but he is full of life and so active.”

Walking back and forth between the sacristy at the back of church to the altar for a recent Sunday evening Mass, Deacon Girard moved at a brisk pace. When asked about the centenarian’s liveliness after Mass, pastor Father Ptak laughed. “I have to grab onto him and say, ‘Hey, wait up! You are making me look bad!’” he said. “I’m 57 and I can’t keep up with him.”

In addition to serving Mass, Deacon Girard attends almost every parish event. “He’s always on the go; a real witness, especially to older people,” Father Ptak said. “He has such a positive spirit and keeps going forward, proclaiming the Gospel and living it.”

Others have noticed Deacon Girard’s enthusiasm for service, too. “The deacon is a wonderful, wonderful man,” said parishioner Ken Krach, who helps out in the sacristy after Mass. “He is very prompt — always one of the first ones here — and he always has words of wisdom. He is a very inspirational, prayerful, gentle man, and his memory is very good.”

When the permanent diaconate was re-established in the United States by Pope St. Paul VI in 1968, the Archdiocese of Detroit opened up a diaconate program in 1971. Deacon Girard entered in 1972 and was ordained on April 25, 1976.

“I never thought I was called to be a priest, but I thought I could use some of my talents to help the Church,” Deacon Girard said. He used to visit the sick and bring them Communion at Oakwood Hospital — and even made house calls, often visiting as many as 20 people a day in their homes.

God love him. I hope that’s me one day. 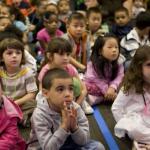 January 27, 2019
Priest to parish: 'Why we don't encourage little kids in church'
Next Post 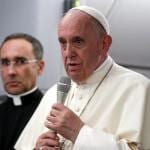 January 28, 2019 Pope on plane: 'My decision is: no optional celibacy' for priests
Browse Our Archives
Related posts from The Deacon's Bench