Now for something different.

Puerto Rican priest Ricardo David Rivera Ortiz surprised the audience of Cardinal Gibbons Catholic High School in Fort Lauderdale in Florida, joining a choreography demonstrating that he has the rhythm in his veins.

The religious, joined the group of cheerleaders of the school and his talent was evidenced in a video, shared on the Facebook account of Fidelity PR and that has gone viral.

“Father Ricardo Rivera Ortiz, who can be seen taking his best steps in this video, is a #boricua who is part of the faculty of Cardinal Gibbons Catholic High School in Ft. Lauderdale. The Dancing Father! ????” , highlighted the station’s account.

According to this item from a Bronx newspaper, he is a member of the Piarist Fathers, and did his seminary studies at St. Joseph’s in Dunwoodie. He was ordained in May. 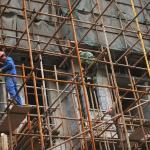 October 26, 2019
Work in progress: Homily for 30th Sunday in Ordinary Time
Next Post 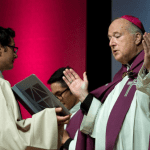