Two and a Half Cheers for “The Hacker Way” 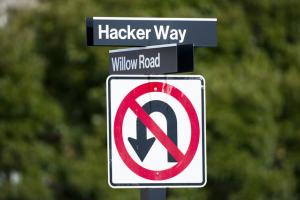 In defense of Mark Zuckerberg, I would like to point out that he has remained true to his ideals. That shows integrity. He has also successfully maintained control of the company. That takes vision and fortitude. These are admirable virtues.

No one should be surprised at anything Facebook has done or left undone. Mr. Zuckerberg spelled out his ethos clearly at the time of Facebook’s IPO in his personal letter to investors. In that letter, dated February 1, 2012, Zuckerberg described his idealistic trust in what has become known as, “The Hacker Way”:

The word “hacker” has an unfairly negative connotation from being portrayed in the media as people who break into computers. In reality, hacking just means building something quickly or testing the boundaries of what can be done. Like most things, it can be used for good or bad, but the vast majority of hackers I’ve met tend to be idealistic people who want to have a positive impact on the world…

Hacking is also an inherently hands-on and active discipline. Instead of debating for days whether a new idea is possible or what the best way to build something is, hackers would rather just prototype something and see what works. There’s a hacker mantra that you’ll hear a lot around Facebook offices: “Code wins arguments.”

Mr. Zuckerberg has remained true to this ideal. During the six years since Facebook’s IPO, the company has repeatedly “tested the boundaries of what can be done,” and apparently kept his promise to not waste time “debating for days” on choices to be made. Of course, this has resulted in a business model that “can be used for good or bad.” We can imagine that the mantra, “Code wins arguments”, has been used to justify any number of schemes to monetize Facebook’s social data.

The latest brouhaha, concerning the misappropriation of 87 million persons’ personal profiles, is an example of how the “Hacker Way” ethos has played out at Facebook. Earlier examples have included the undisclosed use of people’s faces and reputations to advertise products to their friends, and the “emotional contagion” experiment of 2014, in which researchers secretively attempted to manipulate the moods of over half a million people, by toying with their newsfeeds.

In light of these and other actions for which Facebook issued apologies and retractions over the past several years, the scandal for which Mr. Zuckerberg plans to apologize this week before Congress should come as no surprise. It may be larger in terms of number of people manipulated, but this is merely a difference of degree, not of kind.

The “Hacker Way” aligns well with the economic forces that generate wealth in a free market. I too have worked in the software business, and I know these businesses must move fast, or die. This need for speed drives the cycle of “creative destruction” that keeps the economy humming with life. Mr. Zuckerberg is right to see the virtue in “hacking” as a cultural norm that fuels innovation.

The problem with Facebook lies not with enthusiasm for “hacking” and speedy innovation. Those are good things. Two-and-a-half-cheers for them! The problem lies rather with an idealistic worldview that monetizes human relationships.

Years before Facebook’s IPO, Mr. Zuckerberg described Facebook as a channel through which “the stream of all human consciousness and communication” would flow. “People are going to have to have a device with them at all times that’s [automatically] sharing.” [1]

The problem with this worldview lies in the premise that a person’s thoughts, feelings and desires can be quantified, channeled, and manipulated in the form of data. This materialistic view is disconnected from the sacredness of persons and relationships.

Admittedly, this presumption of any sacred, transcendent value in personal relationships is based in theological anthropology. The idealism of The Hacker Way ignores or denies any sacred value. It deals only in data, not in real persons. This disconnection between hacking and the reality of human persons accounts for the moral lapses of the industry.

The Hacker Way is idealistic. It channels virtuous creativity and energy. But so long as persons and relationships are treated as grist for monetization, the mantra of “code wins arguments” will continue to produce ethical breaches.

[1] David Kirkpatrick, The Facebook Effect: The Inside Story of the Company that is Connecting the World (New York: Simon and Schuster, 2010), 313-14.