The Meaning of the City

Jacques Ellul’s book The Meaning of the City (published in English in 1970) is a book I find both stimulating and unsatisfying.

It is stimulating because Ellul describes the city, humanity’s greatest technological accomplishment, as an autonomous and intelligent multi-agent system—something like an ancient form of artificial intelligence with moral agency.

It is unsatisfying because Ellul interprets the city as thoroughly depraved and wholly a curse—a “counter-creation” that “breaks with the divine nature of creation” and represents our rejection of truth for a false autonomy, intelligence, and reality. The final and divine city does not redeem its human predecessors; New Jerusalem, built by God alone, is a rejection of the agency of human builders.

The curse begins with Cain, whom Ellul says establishes a city in opposition to God. Every subsequent city is a corrupt technology of control, certainty, closure, and commodification. The diabolical city cannot be reformed or redeemed; it must be replaced and re-created by God.

I would argue that Cain’s city, an artificial creation named after the natural creation of the son he named Enoch, is not simply a curse. Through the city and descendants of Enoch come also the blessings of the arts and sciences.

In Babel we see the ascendency of the curse and confusions of the city, but in New Jerusalem we see the blessing of human works—“the glory and the honor of the nations”—brought from the final, fallen human city of Babylon into the holy city of God. Are these only realized eschatologically?

Certainly, the city must be purged of corruption and this is ultimately beyond human abilities. But if the agency of the city is greater than humans’, God’s agency—present in every city—is even greater. And cannot we, when our natural and artificial agencies are united with God’s, participate in the transformation of the city in a way that has some connection and continuity with the eschatological city?

Ellul rightly emphasizes the human vocation to bring truth and reality together. His skepticism of human efficacy is warranted, but he seems too skeptical of God’s. The spirit of grace is stronger than the spirit of the city.

Ellul’s interpretation of the city helps us understand Ellul’s negative and deterministic view of technology. The city is entirely within the principality—and only has the power—of death. Humans can be saved, but not the city. Artificial creations seem to have no place in the new creation, in the “unity of reality and truth.”

I find Hugh of St. Victor’s view of technology more helpful: Human techniques and tools have a role in the reformation and transformation of deformed creation. Artificial forms of agency, from the ancient city through autonomous and intelligent systems associated with our current information revolution, are participating in new creation.

December 27, 2018
The Ecclesiology of Virtual Christianity: Oneness and Catholicity
Next Post 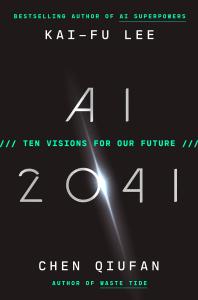