Visiting the Temple in the Secret Country of Yourself

Visiting the Temple in the Secret Country of Yourself February 4, 2018 Jenya T. Beachy

The Temple is the place in the Secret Country where you connect to something larger than yourself. You often find some sort of face on that something, which makes it easier to speak with, but it’s not uncommon to meet deities that appear as a shaft of singing light, or a complicated mathematical shape, or an elephant. We are uniquely designed to be in relationship with all these things and can connect to light and idea and beast. This is the unique composition of humanity: we are one-part animal, one-part god, and one-part the one who mediates these powers into the world of books and refrigerators.

There are, of course, many ways of experiencing deity in your life. For some, the gods are as real as we are, with fully developed personalities and desire and will of their own. For others, there is one overarching god-being that includes all of life and everything, and is differentiated only for the purpose of learning and experiencing newness. For still others, Nature gives the sense of beauty and awe that one might otherwise seek from a supernatural source. Any or all of these may be true for you.

And there are different ways of connecting to the divine. Some consider the gods to have a higher standing than us human creatures, and they submit to the will of their deities and serve them devotedly. Others see their relationship with deity as a partnership, where each brings something of value to the table. Some simply desire friendship and inspiration from their spirits, and they’re less concerned with defining the relationship.

You may come to the Temple with a strong idea of who your deities are, what they want, and what you want from them. Or you may enter with no expectation at all. At the least, I encourage you to approach with an open mind.

This can be complicated! Do you have a childhood history with gods or goddesses? Maybe the big kindly one with the long white beard, or the jealous one who condones rape and murder? Possibly the fecund earth mother or the blessed virgin? Did they feed you well? Did you ever feel threatened by them, i.e. were you told that you’d go to hell if you smoke, drink, have sex? Alternatively, what sort of reward were you promised if you kept to the obligations of the faith? How do you feel about that god, and those activities, now?

If you were indoctrinated into your religion by your parents, you might have chosen to leave your family’s god as a part of a rebellion against authority. Have you ever cut god out of your life and then realized that you missed them? Have you been able to reconnect? If you were not raised in a religious household, do you feel that you lost out on something important?

In the Temple in the Secret Country, you can create your own pantheon. Who is the goddess who holds your hand when you are grieving? Who shares your celebration when good things happen? What god do you hope to make proud of you? If the deities you know, or know of, aren’t fitting well in your life, you may want to seek new ones.

If you don’t believe in a traditional idea of gods, then what might be for a Temple for you? Maybe your place of practice looks like the most comfortable yoga studio, or meditation hall filled to the brim with silence. Possibly, your Temple looks like a laboratory, and scientists are the clergy.

Sometimes you only find out what you deify when you look deeply at your own life and actions. What else might be considered so sacred to you that it becomes a guiding principle? Is your Temple a gymnasium where you worship the gods of fitness? A recording studio where you meet with the spirits of song? The trading floor of the stock exchange where you connect with deities of wealth?

Maybe you are most familiar with what have been called small gods, of this tree, or that bit of stream, or this farm. Those deities aren’t big and extravagant and sometimes they don’t even have names. Instead, they are sort of a coalescence of the energy of a specific place or thing. These are some of my most precious relationships with spirit, and hold the most intimate magick. When I eat the potatoes grown here on our farm, I am nourished by the gods of the spring-water and the compost. When I put a fence around the oaks to keep the goats from eating the young leaves, I do so with respect for all the creatures that will be affected. The goat gods are not amused, but the oak spirits are grateful! I mentioned before that I’m a Dirt-Witch and it follows that most of my deity interactions are quite informal.

In some religions, confession of one’s wrongdoing (defined as ‘not living up to the tenets of the faith’) is an important part of the relationship with spirit. A while back, we talked about staying clear and clean with the Untangling rite. These two things are closely connected! Even when you are not telling a spiritual counselor about your errors, you should be telling yourself. When you confess in the Temple, you may be admitting your transgressions to your gods, if they are interested in hearing them. It’s also perfectly acceptable to tell your story to your own Godself. The important part is that you are offering yourself to the process of forgiving and being forgiven.

In the Shadow House, you may have met parts of you who were struggling with guilt and shame over their bad behaviors. When you listen to those stories, you are acting as the confessor for your own wounded parts. There is great healing power not only in speaking truth, but also in hearing it.

Is there any such thing as ‘communion’ in your Temple? You might have something like the Christian concept of transubstantiation, in which you consume the body and blood of your god. Many Pagans consider that the Harvest feast consists of their god’s sacrifice for his people. Whether you consciously ingest the body of your god/dess in bread or meat, or simply engage in prayer and meditation, you are communing with your god. If you are practicing sex magick, then you are communing with god on an entirely different level!

This is an excerpt from The Secret Country of Yourself: Discover the Powerful Magic of Your Endless Inner World, by yours truly.

The book is now available from my website: http://www.jenyatbeachy.com along with recorded meditations!

The Secret Country of Yourself

See the giveaway details
at Goodreads. 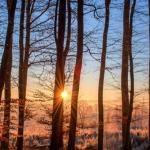 October 24, 2017
Elemental Initiation at Samhain - A Story of the Village
Next Post 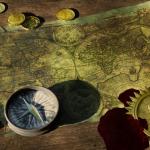 February 14, 2018 Taking the Show (Book) on the Road
Recent Comments
0 | Leave a Comment
Browse Our Archives
get the latest from
Dirt Heart Witch
Sign up for our newsletter
POPULAR AT PATHEOS Pagan
1

Woman Fired From Panera For Being...
3 Pagans and a Cat
Related posts from Dirt Heart Witch