The Borderlands of Art & Worship

There is a third book in the works somewhere which will, when it finally comes out, discuss our frought relationship between pop culture on the one hand, and the Christian spiritual life on the other. Many are quick to point out the harmful affects of the artifacts of the former on the latter – pointing at everything from Madonna or Lady Gaga or Calvin Klein as undeniable proof everything after 1749 (or simply everything) is profoundly base. Others still, with varying degrees of success, work towards our salvation on the assumption that pop culture can disseminate the Gospel, if only they put the right number of bible verses into that deep base.

Despite the differences in attitude to pop culture itself, both positions are strangely bound by a common assumption concerning the artistic (yes, pop culture is a form of art) and the religious. Namely, that there is a zone of overlap between our art-making and our worship which is inescapable. Such is the overlap that references to the divine can seamlessly be woven into the tunes and harmonies of electronica, or why nobody raises no cry of offence at Victoria’s Secret models dressing as angels on the catwalk, or why dinners on episodes of Come Dine with Me can taste divine with nobody batting an eyelid at the transgression between the sacred and the profane. Conversely, it is also the reason why paintings, statuary, glasswork, music and iconography adorn the walls, ceilings and floors of churches and why, conversely, many turn to Mozart, art galleries or music videos as substitute spiritual exercises for those within the Church.

That last sentence should point to something. The sense of transgression between the secular activity of art and the religious activity of worship is actually a very peculiar, and very recent, sentiment. It is not the sign of a new thing called the “postsecular”. In an chapter concerning Mel Gibson’s The Passion of the Christ, in a book entitled The Operation of Grace, Gregory Wolfe commented that anyone who does get offended at this cross border activity between art and worship, even in its most banal forms:

…is forgetting his history. Until the modern era, very few works of art in the history of man…could be cleanly divided into sacred and secular, aesthetic and liturgical. The Divine Comedy is a secular poem, but the hymn to the Virgin in the Paradiso can and has been said as a prayer. The same dynamic relationship between the aesthetic and liturgical can be said of many of the classic paintings that Gibson drew on for The Passion, from Caravaggio’s Deposition to the heart-wrenchingly beautiful Avignon Pieta…In the modern era the same positive tension can be found in paintings by Georges Rouault or poems by Eliot, Auden, or Levertov (72).

All art and all attempts at art, regardless of form, pines towards the liturgical because, as scripture makes clear and as the ancient Church Fathers put into philosophical form, the firmament always shows forth the work of God’s hands (Ps 19:1), the Divine Word that structures every material reality. Whether we know it or not, or like it or not, we always and in all things – and that includes the things on the clothes rack, billboard and phone screen – occupy and stumble within what Wolfe calls the “borderland”, the in-between of the aesthetic and the divine. 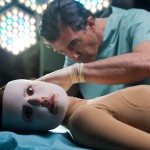 December 21, 2016
Soulless Incisions in the Frantic Pursuit of ‘Now’
Next Post 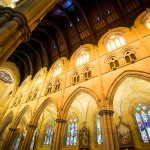