The John Paul II Professor of Theology at the University of Notre Dame Australia, Tracey Rowland, recently launched my little book Redeeming Flesh: The Way of the Cross with Zombie Jesus at a launch event at the University in May. While many might be sick to death of hearing me incessantly speak about the book, I thought it might be a nice change of pace to hear someone else speak of it (Artur Rosman of Cosmos in the Lost has mentioned the book here).

Her speech can be found below:

Milbank’s point is that in order to evangelise post-Christian people one has to get them to see Christianity from a different angle from that to which they have become accustomed.

In other words, the significant difference between the evangelisation of people today and the evangelisation of people in the first few centuries of the Christian era is that in the first few centuries Christianity was new. The novelty of Christianity was obvious for all to see. It was radically different from anything the Greeks and Romans and the Celts and the Norse had known, and though in significant ways it was closely related to Judaism, it was even so different for the Jews that St Paul had to be thrown off his donkey before he got the central insights.

Today however every person living in a Western country has some concept of what Christianity is. The problem we have is that these conceptions are often a long way wide of the mark. Catholics born before 1960 will sometimes equate Christianity with cranky nuns or priests obsessed with hell.

Catholics born after 1960 will often think that being a Christian means supporting leftist political movements. People completely outside the Catholic Church often associate the Catholic faith with puritanical ideas about sex or opposition to the British monarchy.

Milbank’s point is that to get the attention of people who have been poorly catechised or not catechised at all, we need to make the Word strange.

We need to upset popular presumptions about what Christianity is by approaching the presentation of Christianity from an unusual angle. We need to come through the back door or the side window not the front door.

Matthew Tan’s Redeeming Flesh: The Way of the Cross with Zombie Jesus is an excellent illustration of this kind of evangelical operation.

June 19, 2017
Mariology at the Beginning of the Third Millenium
Next Post 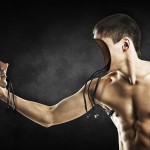 Dale Ahlquist is on a mission...
Chaos and Old Night
Related posts from The Divine Wedgie