Spiritual Transformation in The Birth of a Nation

Spiritual Transformation in The Birth of a Nation October 7, 2016 Craig Detweiler 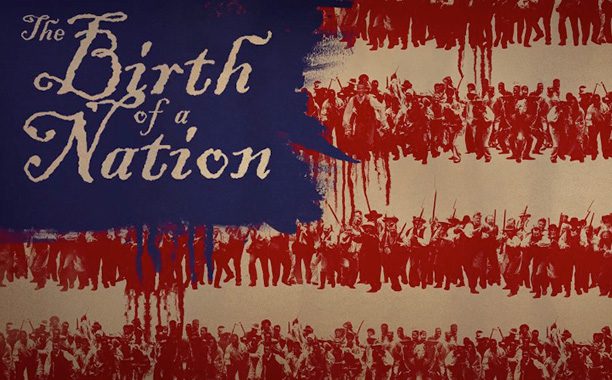 Rarely has such a small, independent film been forced to carry such weight on its shoulders. Purchased for a record breaking price at the 2016 Sundance Film Festival and positioned as an Oscar contender months before it was released, The Birth of a Nation can’t really sneak into theaters. As soon as writer-director-producer-star Nate Parker audaciously titled his Nat Turner story, The Birth of a Nation, he was taking on the tangled history of Hollywood and race relations in America. What rare and remarkable artistic courage. His directorial debut is a potent tonic for our troubled times; messy and oh so necessary. 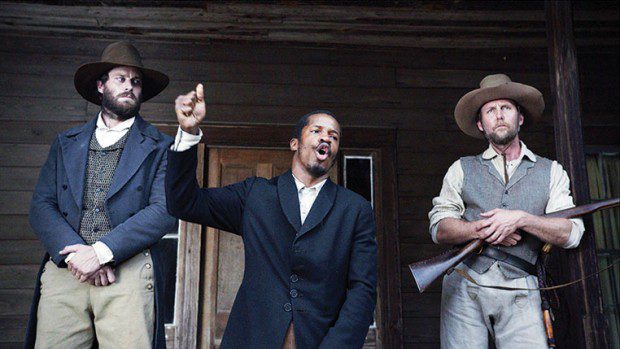 Parker’s Birth of a Nation wades into the complicated history surrounding slavery, the co-opting of Christianity, the abuse of women and black bodies, and the (ongoing) need for African American resistance. It makes conscious connections to Black Lives Matter, police brutality, and injustice in America. Somehow, amidst all of that bold storytelling, Parker did not foresee how his personal history involving black athletes, a white woman, and a rape trial might detract from his artistic intentions. So much baggage now surrounds the film, it will take years before this Birth of a Nation is judged on its own merits.

The title snaps audiences back to 1915 and D.W. Griffith’s ground-breaking glorification of the Ku Klux Klan. Griffith’s Birth of a Nation continues to be studied for its pioneering filmmaking techniques despite the abhorrent depictions of African-Americans. Parker counters Griffith with an alternative Southern history, the 1831 slave uprising led by preacher and prophet, Nat Turner.   While Griffith dazzled the masses with epic scope, Parker’s Birth of a Nation is far more measured and modest in scale. This Birth of a Nation succeeds as a historical biopic, grounding this remarkable story of resistance in spiritual authority. It turns on how the Bible can be used to mollify insurrection or inspire rebellion. How amazing to see scriptural hermeneutics as the wellspring for Nat Turner’s uprising. The Birth of a Nation is one of the most overt and uncompromising stories of religious transformation ever presented onscreen. While charges from Parker’s past will be attached to reviews of the film, Parker’s very present faith resonates throughout the picture. 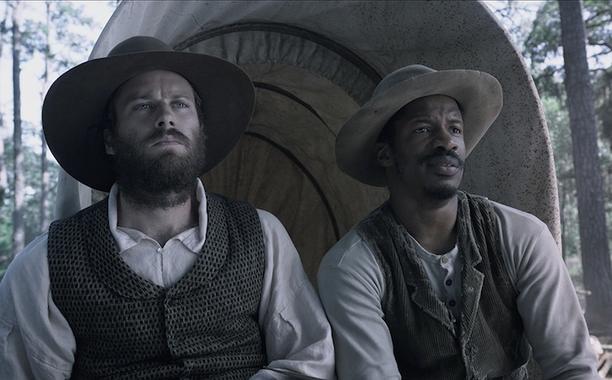 Birth begins with an African tribal rite. Young Nathaniel is marked as a prophetic leader of wisdom and courage. Later, he is taught to read by his seemingly benevolent white owner, Elizabeth Turner. Yet, in the first of many instances, a plantation-owning husband overturns his wives intentions. Nat is sent to pick cotton as a field hand. The Turners appear to be a humane alternative to more abusive slaveholders in Southhampton County, Virginia. Nat talks Samuel Turner (Armie Hammer’s best performance yet) into purchasing a young woman who has clearly been abused by a previous owner. As Nat and Cherry (a radiant Aja Naomi King) meet and fall in love, we see how the joys of family can inspire slaves to endure overwhelming hardship. 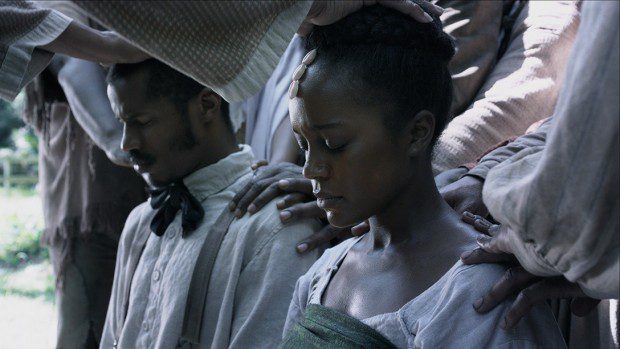 Nat’s gifts as a preacher make him a profitable commodity for his owner. Samuel is paid handsomely for Nat’s sermons that quell slave insurrections via carefully chosen Bible passages. Nat is expected to remind slaves to obey their masters; heavenly promises await those who keep their anger in check. Exposure to the cruelty of neighboring plantation owners disturbs both Nat and Samuel. While Samuel pockets the proceeds, Nat wrestles with his conscience. Scripture reading emboldens Nat. What if the Lord sides with the oppressed rather than the oppressor?  Nat’s awakening occurs gradually, the story unspools in a surprisingly slow burn.

When Nat’s wife, Cherry is raped and almost beaten to death, his anger boils over.  Birth demonstrates how black women were tortured and abused by white plantation owners. It illustrates the physical and psychic damage inflicted on victims and their extended families. Husbands, mothers, fathers, and children also suffer with those who have been abused. The Birth of a Nation makes us cry for justice and sympathize with those who seek retribution. Perhaps as an African American man who has been on trial for the rape of a white woman, Parker connected with this exploration of the South’s sordid history. The film can be read as a form of penance, a defense of all women who have had their history forever altered by violence.

Parker crafted this story with his college roommate, Jean McGianni Celestin. Their shared history as athletes at Penn State University tried for rape has raised a red flag. Given the egregious cover up of misbehavior within the Penn State athletic department, their sexual assault case fits another reading of recent American history. Are Parker and Celestin representative of the entitled, out of control college athletes who’ve made far too many headlines for sexual assaults? Could they be emblematic of everything wrong with our sports obsessed campuses and alumni associations who protect serial abusers like Jerry Sandusky as long as the team keeps winning? Such coddling and exceptions have fueled calls for reform. For activists raising awareness of campus rape culture and victims rights, Parker and Celestin’s Hollywood profile reinforces fears and suspicions about preferential treatment. 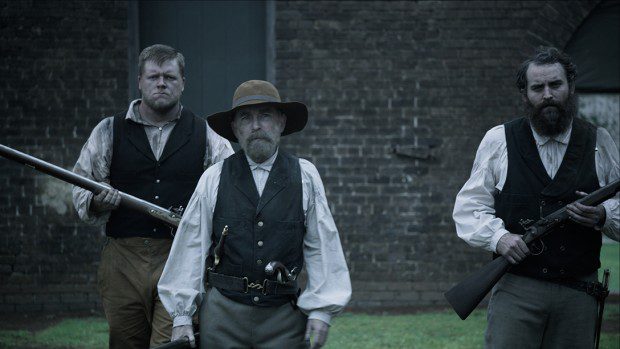 The Birth of a Nation wades into the existential questions we all bring to these complex issues. How long must we wait for racism, sexism, and injustice to be overturned? For those who are abused because of their race or gender or poverty, there is not enough solace in airing our complaints before God. Victims do not want to wait for heavenly justice to prevail.   Nat Turner vows vengeance, despite Jesus’ warning that all who draw the sword will die by the sword. He searches for a sign from God. Inspired by an eclipse, Nat takes up arms. We root for the insurrection. Like Nat, we have witnessed enough cruelty and pain.

The Birth of a Nation is far more restrained in its depictions of suffering than Fox Searchlight’s Oscar winner, 12 Years a Slave. The rapes occur off screen, but the horror and revulsion still registers. 12 Years featured far more directorial flourishes. Parker keeps his style reined in until it is time to fight. When the rebellion begins, The Birth of a Nation begins to resemble Django Unchained. Scenes of revenge are bloody and graphic. Yet, the historicity of Nation denies the audience an easy fantasy kick a la Django. Biblical truths play out. Evil masters will be judged; slaves who take up arms will also be sacrificed (along with many others). It is tough to declare a winner in this gruesome war. Nina Simone sings a requiem for the strange Southern fruit of racism.

Parker portrays Turner as a chosen, but reluctant hero (combining elements of Moses and Jesus). Nat doesn’t naturally seek a fight. The Caucasian villains aren’t written with much nuance (and maybe they don’t deserve it). Life on the Turner farm seems endurable (for awhile). Yet, by traveling from farm to farm, Nat is exposed to realities he cannot ignore. What could be more American (or patriotic) than to rise up against tyranny? 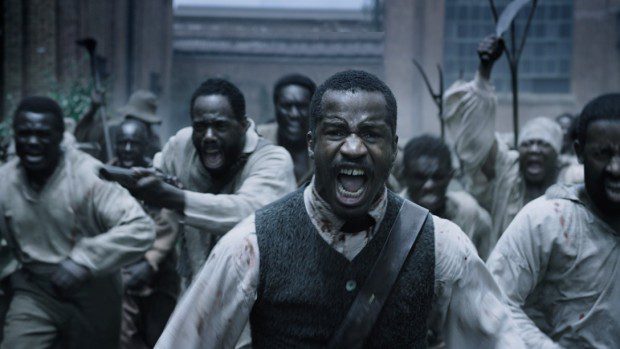 Nat’s journey comes to resemble our current national dilemma. Those of us who have been insulated from the everyday realities of America’s inner cities have been barraged by police body-cam videos. Smart phones are capturing what residents of Cleveland and Tulsa and Charleston and Charlotte have known for far too long. It is tempting to turn our heads against police brutality, to ignore the cries coming from the other side of town. But the evidence is growing overwhelming, the incidents too numerous to suppress. Like Nat, we may need to reread scripture with a fresh set of eyes.

The Bible has been used in nefarious ways. Politicians and preachers can find phrases to bolster almost any position. When our lived experience fails to match up with the aphorisms we’ve been offered, spiritual frisson results. Hermeneutics, the art of interpretation, kicks in when we realize we need to read the Bible more carefully and prayerfully than ever before. Context is key to figuring how ancient truths apply to our contemporary setting. We may not see things clearly from the comfort of our suburban homes. Prolonged exposure to the suffering of others can soften even the most guarded hearts.

Troubled by what he witnessed, Nat Turner found ample argument in the Bible for taking a hatchet towards injustice. It remains to be seen how people of faith and conscience will attack systematic racism in our time. The Birth of a Nation suggests that we may have to join Nat in moving from scriptural excuses for indifference to Spirit-led actions. 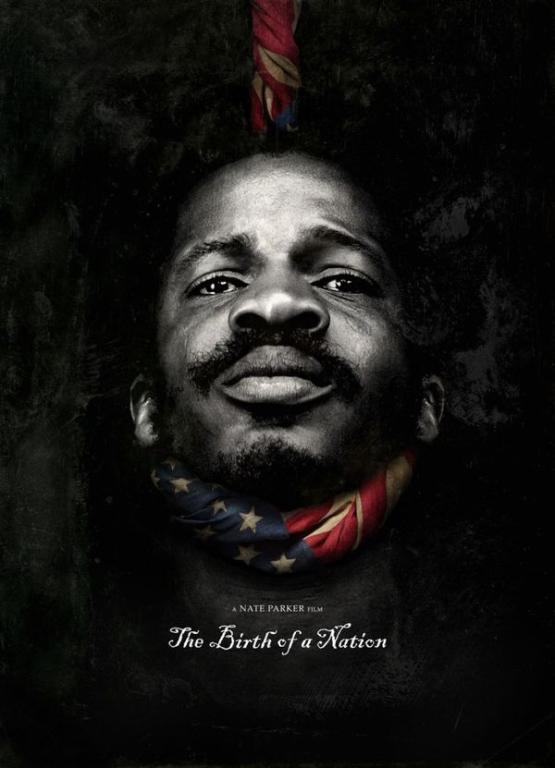 March 31, 2016
Morgan Freeman Explores The Story of God
Next Post

December 22, 2016 The Best Films of 2016: Empathy in Action
Recent Comments
0 | Leave a Comment
Browse Our Archives
get the latest updates from
Doc Hollywood
and the Patheos
Entertainment
Channel
POPULAR AT PATHEOS Entertainment
1

Box office: Redeeming Love opens small, but is...
This week's overall box office marked one of the lowest year-to-year drops,...
view all Entertainment blogs
What Are Your Thoughts?leave a comment
Copyright 2008-2021, Patheos. All rights reserved.