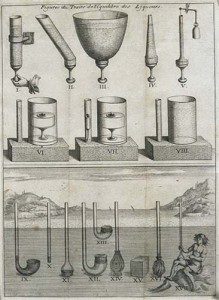 Last week we explored the Jansenist effort to reconstruct Christian community as the fellowship of the really-serious-no-compromise-do-it-right-all-the-time-damn-it. While part of me wishes I could actually be the ascetic that this demands, the other part of me is sitting here eating potato chips.

I suspect Pascal had fewer bouts of self-indulgence, but something kept him from going all the way with the Jansenist agenda. That something may have been his passion for engaging the cutting edge ideas, discoveries, and concepts of the changing world—something a purely Jansenist mentality might have discouraged as a distraction from a pure focus on God. Pascal was not willing to abandon the world, vain though it was. Only by entering into the intellectual fray—scientific, philosophical, metaphysical, and religious—could he satisfy his hunger for truth.

As an example, let’s look at a specific scientific challenge Pascal undertook. We won’t go too far into History of Science 101, but in working out this problem, Pascal developed certain principles that also informed his approach to the work of knowledge-discovery and thus, to the discovery of truth.

The question that was torturing the minds of the scientists of his day was this: Is a vacuum possible? Okay, now you’re thinking about Dysons and uprights versus canisters and maybe dog hair. (And in my house, sometimes a vacuum is simply not possible.) But let that image go. Think instead about a vacuum as a space within which everything has been removed, even all the air. Is that possible? They didn’t know. There were two prevailing theories:

1) The oldest theory drew on Aristotelian thinking, which was that all nature was connected in a web-like existence, a seamless whole, without any “cavity” of emptiness. Nope, no vacuum. Impossible, in fact, because the very essence of matter was that it was interconnected, a fully interwoven reality of air, water, fire, and earth. This theory had been around so long that it had become tradition; it had the “duh” factor.

2) The newest theory was proposed by René Descartes (1596-1650), a French philosopher, mathematician, and intellectual revolutionary. Descartes is our famous thinker who argued that all knowledge could be determined if absolute certainty and rigorous logic were applied. He it is who experimented with the idea that he would accept nothing as true unless he could prove it without a doubt, and thus he mentally threw out everything he had ever before assumed to be true. Finally, he came down to one single thing that he knew absolutely: that he was sitting there thinking about these things. “I think, therefore I am.” I must exist because I couldn’t be thinking about it if I didn’t.

(A rabbit trail we could take at this point: interesting that here we have one of the earliest, clearest instances of the determination of truth beginning with the self. Until Descartes, truth was something we discovered in the world around us, or that was revealed to us by some divine being. Truth was given, disclosed, taught. But with Descartes, truth starts with the self. I start with my own awareness, my own certainties, my own sureties. Personal gnosis. If it doesn’t ring true for me, first and foremost, then it isn’t true. Sounds rather postmodern, don’t you think?)

Descartes concluded that there were essentially two substances in nature—matter and mind. Matter was anything that could be measured; mind was anything that stemmed from thought. A vacuum, an emptiness in which there was no matter, was impossible. It would be a negation of mind and matter both, and such a thing could not be imagined. Therefore, Descartes concluded, even when we think there is nothing, there must be something; he called it an “ether,” invisible matter that fills all space between other substances.

This, perhaps, sounds silly to you. An ether? Really? (But of course, scientists today postulate the existence of “dark matter,” some invisible, immeasurable “stuff” that accounts for large parts of the universe.)

The interesting thing for our Pascalian purposes is that Descartes’ method, which we call Cartesian, is one that depends not on tradition but on deductive logic. If a) there are only two substances in the world, and b) a void is impossible, then c) there must be an invisible ether filling the apparent vacuum.

Pascal approached the question differently, and thus gives us clues about how we, too, might approach the issue of knowledge/truth. A pox on both their houses, he argued. Tradition alone does not give us truth, and logic obviously can mislead. What really matters is an actual exploration of the issue.

So in 1646, Pascal conducts a scientific experiment: he fills a tube with mercury, and then immersed the tube in more mercury, which caused the mercury inside the tube to drop slightly. (This experiment was first performed by Torricelli, Galileo’s secretary, who, like Pascal, clearly understood these things much better than I do. I have no idea why the mercury drops when immersed in more mercury.) Pascal argues that if the tube was full of mercury, then there was no “ether” in it; thus when the mercury shrinks, the empty space must be just that: empty. Voila, a vacuum.

Okay, enough history of science. Let’s look at the principles Pascal derives from this; they will be important if we wish to become neo-Pascalians.

Principle #1: The role of reason in disputing both logic and tradition. Pascal has been called many things. I mentioned earlier that some think of him as irrational, so driven by intuition that he couldn’t be relied on to watch the baby…he might wander off in a mental mist of imagination. That is not Pascal. Pascal was supremely rational—a careful thinker, a calculating lover of minutiae, relentlessly pursuing the arguments of reason as far as they could go.

Principle #2: The importance of observation and experience. Pascal was an empiricist. That is, Pascal believed in discovering truth by trial and error, in finding out what was real, not in assuming he knew it. He believed in the scientific method, which involves both deductive reasoning and inductive experimentation. Deductive reasoning works down from assumed (and hopefully, proven) premises. Inductive experimentation works up from step-by-step observations. Good scientists use both methods.

Pascal found these two principles of knowledge useful in arenas outside the scientific world. They become foundational for him at a much deeper level: that of the work of faith. Both of these—reason and experimentation—may seem counterintuitive to faith, but both of them are essential to Pascalian spirituality.

So what do we find when we watch Pascal import these two principles into discussions about faith?