To Be Judgmental or To Be Wise?

In today’s modern world, everyone seems to be afraid of being called “judgmental.” However, it seems to me that not too long ago people were more afraid to be called “foolish.” I wonder if it’s true that if we are not judgmental to some degree, then we might very well be foolish in some ways? In other words, is there a difference between being judgmental and being discerning? And if foolish is the opposite of wise, wouldn’t people rather be judgmental than not?

However, this dichotomy is not as clear as it looks. The connotation for the “judgmental” label in America tends to be more negative. These days, it implies that the person is not being sensitive to others, more critical than supportive, more ignorant of natural differences than understanding or knowledgeable, and inappropriately behind the modern, progressive times. Who wants to be seen as insensitive, critical, ignorant or backwards? Not I.

And yet, conservatives tend to analyze the finer nuances with issues rather than a black and white conception of matters. Social conservatives speak of the difference between a perspective and a character trait. A person’s theoretical framework may inform her behavior and practice, but the diversity of people who hold the same belief system can also espouse widely diverging interpretations of the same belief system. For example, Christianity is one worldview that has a diverse range of followers. Some are Christian left, some are Christian Right, while many hold an eclectic mix of viewpoints within the Christian faith and culture.

Conservatives point out that people may have varying perspectives or worldviews on a variety of matters, as informed by a host of factors. I might be an upper-class, northern, female, homosexual Muslim conservative (unlikely, but still possible). And you might be a poverty-class, southern, male, heterosexual Christian liberal. And we both might adamantly agree that America should go to war in Iran “to keep terrorism from spreading” or “her political influence from waning in the Middle East.” And we might find ourselves on opposite sides of the North Carolina law restricting bathroom usage to those with matching biological genitalia.

In each scenario, who is being judgmental? Is being judgmental the same as being in the know, on the side of truth, wisdom, and discernment? Or is it about not respecting differences, not being supportive of multiculturalism, plurality, and people in general? If a foolish woman feels blessed after having coffee with a judgmental woman, then is the foolish person foolish or the judgmental person judgmental? Are people’s character traits dynamic and changing? Or are their traits fixed, permanent, and consistent? If someone’s viewpoints and positions change with time or life experiences, would that change our perception of that person’s character?

Can a judgmental person also be altruistic, loving, understanding, and caring? Or is that only reserved for “foolish” people who dream of ideals, goals, and man-made utopia, while criticizing you as being judgmental because you are suspicious or cynical?

Now let’s switch that around: Can a foolish person also be altruistic, loving, understanding, and caring? Or is that only reserved for “judgmental” people who ponder the correct truth, policy, and practice, while criticizing you as being foolish because you are hopeful and optimistic?

My questions can go on. Am I the only one with these kinds of deep thoughts? 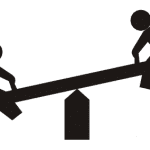