Understanding Your Power and Privilege and Taking Responsibility

Understanding Your Power and Privilege and Taking Responsibility May 18, 2020 Kim Parker, LCSW

Do you ever feel marginalized and dismissed simply for your age, the color of your skin, your gender, or your soci0-economic status? Understanding your power and privilege and taking responsibility is key to self improvement as well as societal harmony. You might not feel that you have any more power or privilege than your next-door neighbor, but let’s take a closer look.

Recently, a girl friend shared about being blindsided by the notion that she has white privilege. This woman was very distressed that her Black friend was writing her off because she “doesn’t get it” and she felt so dismissed and frustrated, even hurt. So, after giving her my empathy, I read to her a list that I had recently made (to deal with my own insanely stressful dilemmas) which this fellow mom found very helpful.

Relax, I’m not an intersectional feminist or a critical race theorist. I’m not writing to promote socialism or Marxist political solutions. A philosopher and psychoanalyst by night, I am an East meets West social worker who would like to promote understanding. I’m not interested in comparing individuals to identify anyone as “better” or “superior” or “having it easier.” Nor will this article serve to label any groups of people as the victims or the oppressors. Miroslav Volf’s book, Exclusion and Embrace, has shed much insight on this controversial topic. Rather, I want adults to understand each other better so that the next generation of adults might have a shot at living with more joy, love, and peace.

Everyone has some power and some privilege in some capacity at some time and, therefore, can exercise some responsibility.

You have power and privilege when you are

1. much bigger or older (by more than a few years),

4. in a position of authority (parents, bosses in the workplace or in ministry, owners, etc…),

Of course, we are speaking relatively since each person, no matter what their list of privileges includes, has vulnerabilities and suffers. Yet, one does not have to be Spider Man or Wonder Woman to understand that with greater power comes greater responsibility.

You have the responsibility to those under you to

3. demonstrate that you’re safe & approachable rather than being aloof or defensive,

4. focus on being welcoming, loving, forgiving like Christ rather than judging others,

5. be humble, open to listening and learning rather than hard-lined,

6. seek to understand rather than expect respect or acceptance,

7. actively accept responsibility for your role,

Based on the first list, I do have some power and privileges. For example, I have the privilege of U.S. citizenship–living in the most advanced, economically prosperous, free nation in the world. I have significant influence over impressionable children, and particularly with my young dependents. Living in the American middle class, I have the privilege of not having to live paycheck to paycheck. As a college educated, first generation Asian American, I have more power and privilege than newer immigrants, especially if they are undocumented. And though I’m a racial minority in America, as a Christian in the South, I am in the majority. Therefore, I have the responsibility to recognize the advantage of this cushy network.

This brings me back to my dad. A short, self-made Vietnamese businessman, Dad fought the North Vietnamese Communists, navigated the South China Sea without any formal training, and swam his children to the Malaysian shore on his shoulders. Then with the help of some small town predominantly White Christians, he got his family out of refugee camps to live in the land of the free and home of the brave. He never complained about being marginalized by racist Americans because people’s ignorance was the least of his concerns.

Dad would always tell me and my siblings when we were growing up that the one who is more mature would be the first to yield in a relationship standoff or conflict. He and Mom reminded me of this years later when I got married. Be the first to yield.

What about you? Can you recognize the power and privilege you have? Will you start to own it and take responsibility for it? 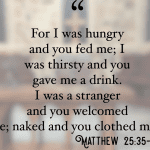