Coming Out of the Big Closet

where practically everyone is hiding, except for celebrities.

When people talk about coming out of the closet, it’s generally known that they are talking about their sexual orientation. I first heard this term twenty-some years ago in a psychology textbook in high school or college. Back then, it meant that a young person was struggling with same sex attraction and had decided to accept his “identity” as gay (or lesbian, for women), thereby validating and normalizing this part of himself. In the last two decades, the normalization has broadened to include a variety of deviations from the traditional heterosexual, “hetero-normative”  orientation, so the term also refers to how people express or view their gender that may deviate from their biological sex organs/chromosomal dna.

And yet a few years ago, I found myself coming out as a “beautiful mess” to a bunch of church moms. When I shared about this event on FB, immediately a friend asked, “does this mean what I think?” So, I clarified that I was sharing a poem of how I was paradoxically beautiful in my ideals, attempts, and desires while at the same time always falling short of these. Even as a helping professional with an image and reputation to uphold, I can be a bit of a mess inside from time to time. Researcher Brene Brown talks about the “armor” that people wear to hide their vulnerabilities, shame, or guilt.

My armor must be extremely thick because no one knew and everyone thought it was fabulous that I came clean.

And this year, I realize that by daring to reveal my childhood skeletons of being clueless, foreign, raised on welfare, and exposing my viewpoints that may not be politically popular in this postmodern age that I’m coming out again. I’m a closet conservative working in the most liberal, tree hugging profession possible–social work. How does one survive in this profession? Implementing the basic values of empathy, client determination, mutual trust, and strengths perspective to encourage clients has kept my practice thriving for over seven years. #thankful

But going public with a book is a much bolder, riskier move. Without the confidentiality of the helper-client relationship that serves to build rapport and mutual understanding, I had to disclose personal information on record so that I could be relatable to readers. My thoughts and feelings about controversial topics to bridge two seemingly opposite people groups would only make sense if the heart and mind connects. I found myself exposing both private organs in this personal memoir while trying not to damage my professional brand as being open minded and effective with diverse client populations. Just like people don’t want to be judged or shunned but accepted and understood, so too, I struggle with coming out with my truth.

What is your truth, and is it time for you to come out also? Or would you rather hide in anonymity, lost in the huge middle part of the bell-shaped curve like I had been doing for most of my life. Do you prefer the comfort and safety of the same o, same o? Or do you have a fire in your tongue ready to ventilate? How about an idea/vision/conviction waiting to be acted upon with courage? So far, I’ve only received positive book reviews, so this coming out phase may not be as scary as I had imagined. 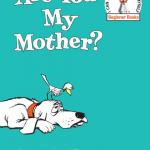 January 6, 2017 Are You My Mother?
Recent Comments
0 | Leave a Comment
Browse Our Archives
get the latest from
Evangelical
Sign up for our newsletter
POPULAR AT PATHEOS Evangelical
1