Recently, I was chatting with a few of the female youths of my classroom about up-and-coming pop artist Daya’s song Sit Still Look Pretty. As it wasn’t requests for Drake’s One Dance, I was more than happy to hear it. The song was catchy in the way bubblegum pop songs aspire to be—another instance, along with bubble gum-girl power pop queen Meghan Trainor, of what Spencer Kornhaber describes over at The Atlantic as “this cultural moment when social causes meant to reform mass media are becoming tools of mass media.” In other words, Daya has no intention of being “the puppet that you’re playing on a string.” After all, like Bey, though with less “intersectional feminism” than Lemonade laid claim to, Daya is a queen who “don’t need no king.”

While I can definitely agree with the sentiment of not wanting to simply “sit still look pretty,” and hey, everybody wants to rule the world, I happened to hear this the same day I read Mary Pezzulo’s excellent You Do Not Have to be Pretty. Consequently, I ended up thinking far more about femininity and beauty and being pretty than I had planned today.

Pezzulo makes the following excellent point over at Steel Magnificat (I added bold text for emphasis):

…Feminine beauty is part of our dignity, don’t be afraid of your femininity, embrace your womanly side, modest but beautiful clothing enhances a woman’s dignity, the loveliness of women leads men naturally to virtue, a chapel veil makes a modest girl more fetching. Some of these sayings could be profound if they weren’t always interpreted as an advertisement for long curling hair and flowered dresses (knee-length or longer for chastity’s sake). Quite a few of them are downright creepy. A man who stares longingly at the chapel veil three pews ahead of him at the Tridentine liturgy is no different than a man who stares longingly at a barmaid’s exposed bosom. Yet we go on with this nonsense. I’ve had youth group leaders who thought women shouldn’t play certain sports because it made them look too manly. Around here, there are even weekend retreats where women “embrace their beauty” by putting on pearl-studded flower crowns or giving each other makeovers. As far as I can tell, a tremendous amount of women honestly believe that they owe the world in general and Christian men in particular, surface attractiveness.

What I found refreshing about Pezzulo’s train of thought is that, unlike pop-processed feminism, she does not appear to think that since we all  too often see the “[the sexual urge] directed towards the sexual attributes as such [and recognize this as an] impoverishment or even perversion of the urge,” as Saint John Paul II wrote in Love and Responsibility, we must consequently reject any possibility of a “desiring-for love” [amor concupiscentiae], along with those goods which we find desirable, coming into play between men and women. Robert Spaemann illuminates this seeming incongruity by suggesting that the problem of desire, or the impoverished sexual urge, comes about when “the one looked at is not herself anymore the object of amor concupiscentiae, but rather the desire itself is the goal and the desired person only the means to experience the desire. That is adultery, even if it is one’s own wife.”

Daya’s song resonates with my female students not because they want to destroy western civilization by rejecting men due to some patriarchal dream of “picket fences,” but because, I suspect, to my female students who dream of growing up to be biochemists, engineers, writers, singers, nurses, doctors, computer programmers, missionaries, mothers, and CEOs, they are scared of a picket fence dream that would necessitate they play the role of “trophy wives.” In the strangest, and perhaps confused, manner, these students are articulating the same understanding of feminine beauty Roger Scruton’s Beauty: A Very Short Introduction recognizes in the art of Titian, a man who’s art through a somewhat misaligned lens might appear only concerned with women who sit still and look pretty. Yet, for all Titian’s nudes exude the beautiful, and for all they are often sitting, Titian’s subjects serve as an object lesson in understanding how the desire to do more than “sit still look pretty” is an indistinct realization, at least on some level, that

This body is on offer only in the way that the woman herself is on offer, to the lover who can honestly meet her gaze. To all others, this body is out of bounds, being but an embodiment…The face individualizes the body, possesses it in the name of freedom, and condemns every covetous glance as a violation. The Titian nude neither provokes nor excites, but retains a detached serenity—the serenity of a person, whose thoughts and desires are not ours but hers.

Turning back to Scruton,

My body is not my property but—to use the theological term—my incarnation. My body is not an object, but a subject, just as I am. I don’t own it, any more than I can own myself.  I am inextricably mingled with it, and what is done to my body is done to me. And there are ways of treating it that cause me to think and feel as I would not otherwise think or feel…Sexual feeling…is a tribute from one self to another and—at its height—an incandescent revelation of what you are. To treat it as a commodity….is to damage both the present self and the future other.

To return to Pezzulo, I think she rightly uses the word “owe” when speaking of how we too often view and speak of “feminine” attractiveness. After all, the language of debts is the language of economics, and commodities belong to that rendering of the world. What it comes down to is this: everyone, male and female, should strive to embrace the universal call to holiness and pursue deeper union with the Trinity through ever-greater union with Christ Our Lord. This “vocation” or “pilgrimage” or “race” might involve receiving the graces to grow in sanctity in ways deeply integrated with our lived human experience as males and females. Thus, men will be more masculine and women more feminine at the end of their journeying, I suppose. However, short of donning a religious habit or priests collar or wedding gown or groom’s tux, this sanctification has very little to do with “being shod,” be that taken in reference to heels, pearls, ballgowns, farmers  plaids, or mascara.

Moreover, it is Love performing this sanctification, not lipstick (though a priest once did tell me it can’t hurt), and it is Love that “gives the beloved the possibility to be a person, and to be a person in a unique, non-interchangeable way” as Spaemann reminds us. Though it goes about finding this Love indistinctly, a refusal to “sit still look pretty” is a rejection of being a paper doll to play a game wherein desire itself is the goal.

Yet, we do not reclaim our person through a display of force, by ruling the world. This is where the error comes in, holding that since she won’t “sit still look pretty” then “this gal right here’s gonna rule the world.” This is to miss the point: we do not find ourselves through a show of force, but through the dimension of gift—through offering ourselves to another, going outside “the self to find a fuller existence in another,” as Saint John Paul II expresses it. This is the great truth we too easily forget when the body and sex and modern philosophic wanderings come into play: the way to subvert the dehumanizing gaze of desiring-for love of desire is not to rule the world with a show of power, it is to imitate the personal and self-giving love of Christ, who has overcome the world in the self-gift of His Body and Blood. 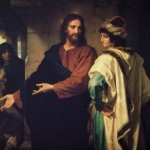 May 27, 2016 Don't Check Your Privilege
Recent Comments
0 | Leave a Comment
Browse Our Archives
get the latest from
Catholic
Sign up for our newsletter
POPULAR AT PATHEOS Catholic
1