Impeach Trump To Send Russia a Clear Message: Not on Our Watch!

Impeach Trump To Send Russia a Clear Message: Not on Our Watch! April 19, 2019 Leah D. Schade

Should we impeach Donald Trump?

We have impeached presidents for suspicions of much lesser offenses.  The Mueller Report provides a disturbing list of unethical conduct that is not only detrimental to the office of the presidency, but to the integrity of the country.  What is especially concerning, however, is that Russia targeted this highly unethical individual, his family, and his nefarious colleagues in order to attack America and the heart of democracy.

As Congressional leaders debate whether or not to draw up articles of impeachment, perhaps they should consider an important angle.

There appears to be agreement from nearly all members of Congress that Russia meddled in our election process and seriously compromised our national security.  If these members of Congress – Republicans, Democrats, and Independents alike – are indeed sincere in their expressions of concern and even outrage about Russian hacking our democratic process, then the way forward is clear.

If they are truly intent on taking steps to protect the integrity of our nation, then the way forward is clear.

If Congress wants to send a message to Russia – or any other entity that seeks to undermine and disrupt democracy – then the most obvious way to do this is to impeach Donald Trump.

Impeaching Trump would send a clear message to Russia:  not on our watch!

Not on our watch will we stand by and allow this despicable move toward authoritarianism to take root and metastasize like the cancer it is.

Not on our watch will we Tweetle our thumbs while a criminal gets away with the most egregious heist on American democracy we have ever witnessed.

This is not a matter of political strategy.  It’s not about playing 4-D chess.  And biding our time to wait for the next election – which will surely be compromised once again by Russia – is not an option.

As a Christian trying to follow the Ten Commandments and the teachings of Jesus, I want to see the supposedly Christian members of Congress uphold the values of telling the truth and protecting the vulnerable. As a parent trying to raise my children with upstanding moral values, I want my elected leaders to do the right thing.  I want to be able to say to my kids – see, attacks on goodness and integrity will happen, but we made every effort to right the ship.

I want to be able to stand in solidarity with those who have suffered the fall-out from the election and presidency of Trump and tell them: take heart, justice is coming.

I want to breathe just a little easier knowing that Jesus’ words are as true today as when he said them 2000 years ago:

Leah D. Schade is a seminary professor in Kentucky and is author of the book Creation-Crisis Preaching: Ecology, Theology, and the Pulpit (Chalice Press, 2015).

In God We Trump: Film Review

9 Reasons Trumpy Bear is a Sham: The Cuddlefication of a Despot 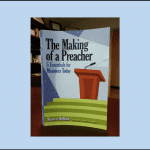 April 12, 2019
The Making of a Preacher by Marvin A. McMickle: Book Review
Next Post

April 21, 2019 The Proximity of Hope: An Easter Sermon
Recent Comments
0 | Leave a Comment
Browse Our Archives
get the latest from
EcoPreacher
Sign up for our newsletter
POPULAR AT PATHEOS Progressive Christian
1