The Crucifixion of Jesus is Now: Reflecting on the Passion in John’s Gospel

The Crucifixion of Jesus is Now: Reflecting on the Passion in John’s Gospel April 2, 2021 Leah D. Schade

Huddled with my children in our living room as the sun sets in a darkening sky, we listen to the reading of the Passion of Jesus in the Gospel of John for our church’s online Good Friday Service.  The screen glows in the quiet room as the pastor retells the story of the crucifixion we hear ever year.  This time as I listen, images and stories of the past year arise in waves that wash over the Gospel story leaving a detritus of pain and anger littered on the shore.

I hear Judas betraying Jesus, leading the mob to seize him and take him away to his death.

And I think of the betrayal of those who swore an oath to protect their fellow citizens and the Constitution, inciting a mob to attack Capitol police and Congressional leaders.  Violence and chaos engulf a sacred place and sacred time, scattering and scarring their victims.  This is not the cup they chose, yet it did not pass from them.

And I think of the politicians and conspiracy influencers who have so destroyed the fabric of truth for millions of people that we cannot even agree on what is real and factual anymore.  Pilate called truth into question and did not have the courage to spare the life of an innocent man.  So, too, certain leaders lied and continue to lie repeatedly about the things of life and death – the coronavirus, climate change, families at the border, the efficacy of vaccines.  They do not have the courage – nor the moral decency – to tell the truth. And millions of people have died or will die because of their succumbing to Pilate’s Syndrome.

I hear of Jesus thirsting and I think about a law passed in Georgia criminalizing giving water to those waiting in line to vote.

Not even the killers of Jesus would refuse giving a drink to that man suffocating on a cross.  But Republican lawmakers in Georgia would prevent voters waiting in long lines – that they themselves created because they have closed so many polling places in communities of color – from receiving even a cup of cold water?  These same “Christian” politicians who claim to worship a man who said, “if anyone gives even a cup of cold water to one of these little ones who is my disciple, truly I tell you, that person will certainly not lose their reward”? (Matt. 10:42).  They slither like Annas and Caiaphas behind closed doors codifying injustice into legislation meant to ensure their power while their uniformed goons arrest an elected black woman knocking at the door.

I hear of Jesus calling to his mother, giving her into the care of his beloved disciple.

And I think of the video recording of George Floyd’s murder under the knee of a white policeman.  He called for his mother as he lay dying.  No Pietá for George.  Or Breonna.  Or the thousands of human beings born into black or brown skin killed before them.

I hear of Jesus giving up his final breath after his lungs agonized for hours against his ribcage collapsing in on itself.

I hear of a soldier piercing Jesus’s body with a spear and a spray of blood and water flying into the air.

I think of the bodies pieced by gun bullets every day in this country, blood and tears flying everywhere.  Collateral damage for a culture possessed by a demonic spirit that masquerades as “rights” and demands the sacrifice of the innocent to satisfy its bloodlust.

I am so finished with “It is finished.”

I am so weary of the endless processions of Josephs and Nicodemuses and Marys who must mourn bodies murdered with impunity by those who betray, lie, and murder.

We sing the hymn, “Were You There When They Crucified My Lord?” and I think, no, I was not there.

The crucifixion of Jesus is now. 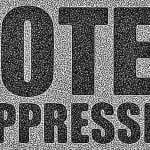 April 9, 2021 Are We Still of Any Use? A Response to Bonhoeffer in Honor of Dr. Katie Day
Recent Comments
0 | Leave a Comment
"I guess a downvote means that the truth is unacceptable. Wait is that suppressing your ..."
Nimblewill Clergy Respond to Racist Voter Suppression ..."
"We don't read laws anymore. Silly Goose."
Nimblewill Clergy Respond to Racist Voter Suppression ..."
"Thank you, Ken. Indeed, I encourage my students to connect scripture with the injustices in ..."
Leah D. Schade The Crucifixion of Jesus is Now: ..."
"Oh my--THIS is preaching! I read this sermon over breakfast, and it literally took my ..."
Ken Herman The Crucifixion of Jesus is Now: ..."
Browse Our Archives
get the latest from
EcoPreacher
Sign up for our newsletter
POPULAR AT PATHEOS Progressive Christian
1

Why American Evangelicalism Was QAnon's Perfect...
Honest to God
Books by This Author Books by Leah D. Schade