‘You will pray even in Spanish and Chinese’: on the Holy Apostles Peter and Paul (St Philip’s Fast #7)

‘You will pray even in Spanish and Chinese’: on the Holy Apostles Peter and Paul (St Philip’s Fast #7) December 4, 2018 Justin Tse

When I announced to my friends that I was getting chrismated in the Kyivan Church in the weeks leading up to it in June 2016, the formula I’d use was that I was seeking communion with the Bishop of Rome through the Church of Kyiv. It wasn’t wrong because that is exactly what happened, but as things go in mystagogy, I now find the formulation a little immature. Perhaps, I reflect, is the apostles on whose day I was chrismated, the Holy Apostles Peter and Paul, who have helped me grow through my immaturity.

The Holy Apostles Peter and Paul have been in my beautiful corner nearly from the beginning, and when I acquired their icon, I was very particular about the one that I wanted. There are icons of the apostles embracing, icons of them standing apart, icons of them being on the hills of Rome, but the one that I had to have was the one where they share in holding the church up, with the Lord Jesus blessing them from heaven. That is the image I saw as I was received into the church on the epitrakhil of my spiritual father. It was on the tetrapod before which I prostrated and on which was placed the Gospel book upon which my sins were forgiven. It was in sight of them that I was chrismated, sealed with the gift of the Holy Spirit as I joined the Catholic Church.

I say that my initial formulation of seeking communion with Rome through Kyiv was immature because that is only one aspect of what happened when I became Catholic. It can be said that the understanding of Byzantine Christianity we received from our mother church, Constantinople, was one that was fully in communion with the Latin Church in Rome, and in seeking restoration of sharing at table, our participation in the Second Council of Lyon and the Council of Florence-Ferrara led eventually to the Orthodox Metropolis of Kyiv signing the Union of Brest to guarantee the keeping of our traditions while joining in communion with our sister church in Rome. It is, as our Bishop Benedict of Chicago puts it, our very own Tomos of autocephaly, one that allowed us to be truly Catholic in and of ourselves because it meant that we did not have to be either Catholic or Orthodox but grow organically in the full consciousness of what it means that all things are ours in Christ. Communion with Rome is a major implication of our catholicity in and of ourselves. How could we not be in communion with our sister church if we are truly Catholic?

But a year out from my chrismation, the installation of Bishop Benedict by the Patriarch in St Nicholas Eparchy of Chicago deepened my understanding of the church I had gotten into. Appealing to the Holy Apostles Peter and Paul on whose feast the service happened, Patriarch Sviatoslav gave Bishop Benedict a charge to reach out to all people. He said:

But at the same moment, at the same time, Apostle Paul was saying to us that that eparchy has a specific characteristic because it unites people not only of the Ukrainian background or origins – that eparchy prays and celebrates Divine Liturgy both in English and in Ukrainian, but many tomorrow following the spirit of St Paul, you will pray even in Spanish and Chinese, because we are Ukrainian church, but not a church for Ukrainians. We are a church of Christ, with the universal message of his gospel, which is opened to everybody who wants to receive the eternal life through the ministry of the new bishop to proclaim the word of God, to sanctify the people of God with the sacraments, and to govern that church in the name of Christ.

What it means to be truly Catholic as the Kyivan Church, in other words, is that we are not the ethnic chaplaincy to the Latin Church. We are Catholic in and of ourselves, which means that we do not reach out only to Ukrainians, but ‘will pray even in Spanish and Chinese’ in addition to English and Ukrainian. My spiritual father and I, watching from Richmond, fell off our chairs. Our temple in Richmond prays in Chinese.

The apostolic impetus for this sense of catholicity are the saints on whose day I was chrismated, the Holy Apostles Peter and Paul. The meaning of their martyrdom at Rome goes beyond the locale in which they gave their lives. In their letters that form the Scriptures that our church reads at the liturgy, they describe what makes a church Catholic. In and of itself, the local church is held together in the common life of love. This togetherness is expansive, and what it means to evangelize is not to join with empire, but to expand the circle of this love through the city in which we gather. The word to describe evangelism is not just evangelical; it is Catholicism because it is the love that makes us Catholic that draws more people into fellowship in the Lord. This is the truest meaning of the icon of them holding the church aloft: through them, the church is constituted by this love.

When I see them, the words of the song of the Latin Church ubi caritas come to mind. Not only have I come into communion with Rome in the Church of Kyiv, but I am more importantly gathered with the people of God in the local Kyivan Church that is constituted not by ethnicity, but by love itself. Deepening my mystagogy in this church, the song that the chief apostles evokes is thus:

These reflections on the icons in my beautiful corner compose the series I am writing for this year’s St Philip’s Fast in preparation for the Feast of the Nativity, beginning on the Old Calendar as I am in Chicago and switching back to the New Calendar when I return to Richmond in mid-December. They are attempts to account for my process of conversion in the Kyivan Church without discounting the Chinese Christianity of my Protestant past. This post is the seventh.

The previous posts are on the San Damiano Cross, Rublev’s Trinity, the relation of the Black Madonna to the Oranta of Kyiv, the Sinai Pantocrator in relation to the Dormition, the ‘angels and archangels,’ and the Prophet Jonah with Moses, Elijah, and John the Baptist. 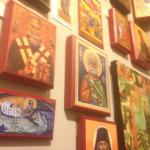 December 4, 2018
'Out of the fish's belly': on the Holy Prophets Moses, Elias, Jonah, and the Forerunner John (St Philip's Fast #6)
Next Post 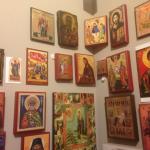 December 5, 2018 Living between theology and religious studies: on the Holy Apostle Thomas and the Holy Apostle Jude (St Philip's Fast #8)
Recent Comments
0 | Leave a Comment
"I can't believe you would consider the theological lightweight Kilby as a proper critique of ..."
antoniodec Fiat mihi secundum verbum tuum: on ..."
""Milbank criticizes Balthasar for being apolitical in his aesthetic reflections, and I can see how ..."
antoniodec Reading Sobrino on Óscar Romero and ..."
"the word is receptive, which has nothing passive about it but could be the most ..."
antoniodec Fiat mihi secundum verbum tuum: on ..."
"One can never "go home," not in this life."
billwald I’ve found my way home: on ..."
Browse Our Archives
get the latest from
Eastern Catholic Person
Sign up for our newsletter
POPULAR AT PATHEOS Catholic
1

Listen to the Church, not LifeSite,...
Chaos and Old Night
Related posts from Eastern Catholic Person