‘Out of the fish’s belly’: on the Holy Prophets Moses, Elias, Jonah, and the Forerunner John (St Philip’s Fast #6)

‘Out of the fish’s belly’: on the Holy Prophets Moses, Elias, Jonah, and the Forerunner John (St Philip’s Fast #6) December 4, 2018 Justin Tse

Back when I was an evangelical, a number of my sisters and brothers would refer to me as Jonah. Clearly, they would say, I was called to ordained ministry, and for a time, I even explored that calling. Then after a ministerial disaster during my internship in which both the youth group I started and my New Calvinist theology collapsed at the same time, I supposedly ran from the calling and went to graduate school in geography, never to return back to parish work. Watch out, they’d say, God will send a big fish your way to swallow you.

I used to be very frustrated with this typological description as it was applied to me, but since my conversion to Eastern Catholicism, I have been thinking about it and have concluded that it is not my problem anymore. After all, my spiritual father is a Jesuit, and there is no religious order better than the Society of Jesus that specializes in putting the reader of Scripture into the scene in an imaginative way. We’ve never talked about my Jonah problem, and I suspect it has to do with the popular evangelical reading of Jonah being awfully shallow. It doesn’t even work in the narrative structure of the book. I do not have a message to bring to anything that even closely resembles Nineveh.

The culture of evangelicalism has a very interesting perspective on the prophetic gifts. Some will tell me that the reason why God would speak directly to someone is to convey a message, and therefore, that word has to be delivered and then received at face value. Of course, this uncritical approach to prophecy, one that defies the Holy Apostle Paul’s injunction to the Thessalonian church to not despise prophecies but to test all things, is part of a larger debate to be had among evangelicals about the nature of the prophetic. Does God speak directly to people? the question might be put. Or does he speak only in his Word? which evangelicals narrowly conceptualize as the canonical books of the Bible, often to the exclusion of the parts that they call the Apocrypha. This dichotomous approach to prophecy is, I think, responsible for the misinterpretation of Jonah. Either I was saying what the Lord had put on my heart to say, the logic went, or I was running from my calling.

Becoming Eastern Catholic has been tremendously liberating from this evangelical binary on prophecy. My brother Julian told me on Sunday that when I pray the entire canon in Reader’s Matins (something I’d never put him through if I were praying it with him, or in a congregation of more than one in general), I’m doing more than most people in our Kyivan Church, except for the monks. There is a reason I do that, though. In the practice of many of our churches, we usually just sing the irmoi, the tone-setting melodies, from the nine odes of the canons, usually without the second one because it is penitential. A full canon includes reading the Scripture on which the odes are commenting, the irmos for each ode, the tropars (theme verses) in each ode (and these can be from more than one canon) with short congregational responses, and a katavasia, which is an ending melody to close out the section. It doesn’t take more than ten extra minutes, I protested to Julian, although with video evidence of my escapades, I am beginning to think that what feels like ten minutes to me actually lasts an hour.

The sixth ode is about the Prophet Jonah. The irmos describes praying out of the depths ‘like the Prophet Jonah,’ and it doesn’t make sense without the canticle, which is Jonah praying for salvation out of the belly of the fish that ate him. I get that most biblical commentators write off the Book of Jonah as apocryphal, even though it is part of the section of the Prophets known as the Twelve (and I refuse to call them minor because they’re my favourites), because there is no one in real life who gets eaten by whales, except for the real boy Pinocchio, along with Geppetto, Figaro, and Cleo. But whether or not there really was a big fish, the Lord Jesus does a midrash riff on the story by coining the term sign of Jonah, which is that just as Jonah was in the belly of the fish for three nights and three days, so too will the Son of Man be in Sheol before he rises from the dead.

As far as I am concerned, this kind of typology is a corrective to the bad typological applications I picked up in my evangelical past. Moving me off the masturbatory impulse to apply the Bible to myself — after all, is not the self-assertion of my own vocational calling and the making of all biblical types about me a kind of spiritual masturbation? — the Matins canons make their connections between the stories of the Hebrew prophets and their fulfillment in the Messiah of whom they speak. As far as how they concern me, it is in the ninth ode that we discover that Mary the Godbearer, whose entry into the temple we celebrate today, is the type of the worshipper with arms upraised in prayer. It is in her bearing of the Lord in her body and the prayer that arises from that encounter that I recognize myself as primarily a worshipper, someone whose pondering on the Lord and his word evokes the praises upon which he is enthroned.

Such is the case for all of the prophets in my icon corner. I discovered that my baptism anniversary on the Old Calendar coincides with the feast of Holy Moses the Prophet. I learned my liturgical sensibilities in large part from a temple in the Kyivan Church in Brampton, Ontario named for Holy Elias the Prophet, and I picked up a free icon from them when I was at the consecration of their new building. So many of my daily prayers revolve around the Holy Prophet and Forerunner and Baptist John, and in divine humor, I have been influenced by enough Baptist theology in my childhood (my dad studied with the American Baptists in Berkeley and was ordained in a black Baptist church in Oakland) to warrant a devotion to the Baptizer. The prophets, like Jonah, are icons of my baptism, my immersion into the life of the Lord as a worshipping believer. I am submerged in their words, not in seeing them as mirrors for my own vocation.

This is why I pray the entire Matins canon when I am on my own. It is not because I am trying to be more monastic than a monk or because I am trying to show off what I can find in the liturgical resources from which I pull. It is a deliberate act of mystagogy, of recognizing the way that the prophetic gifts were distorted in the communities of my past and of understanding that I need to unlearn these spiritual habits. What that requires is immersion in which the baptism of my youth as an evangelical is realized in the wisdom of the Catholic and Orthodox Church. Thus says the Lord are not my words to the world; they are the word of the Lord to me, calling me to find myself in the bearing of God within my body as a temple of the Holy Spirit. In this way, perhaps I come to see myself once again in Jonah, but not as one who runs from his call. The sign of Jonah is the cry from the depths, from the belly of the fish. As we sing in the irmos: And like Jonah I will pray: O Lord, raise me up from corruption!

These reflections on the icons in my beautiful corner compose the series I am writing for this year’s St Philip’s Fast in preparation for the Feast of the Nativity, beginning on the Old Calendar as I am in Chicago and switching back to the New Calendar when I return to Richmond in mid-December. They are attempts to account for my process of conversion in the Kyivan Church without discounting the Chinese Christianity of my Protestant past. This post is the sixth.

The previous posts are on the San Damiano Cross, Rublev’s Trinity, the relation of the Black Madonna to the Oranta of Kyiv, the Sinai Pantocrator in relation to the Dormition, and the ‘angels and archangels.’ 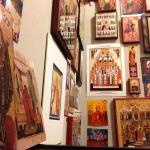 December 4, 2018
Reader's All-Night Vigil: The Entrance of the Theotokos into the Temple
Next Post 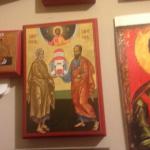 December 4, 2018 'You will pray even in Spanish and Chinese': on the Holy Apostles Peter and Paul (St Philip's Fast #7)
Recent Comments
0 | Leave a Comment
Browse Our Archives
get the latest updates from
Eastern Catholic Person
and the Patheos
Catholic
Channel
POPULAR AT PATHEOS Catholic
1