And of course this doesn’t stop here in the US. We are not the worst of sinners, though we are certainly not the least either. My Syrian Christian friends (I currently have no Syrian Muslim friends, though this hatred and death afflicts them as well) have seen their homes destroyed as they fled to safety. An ancient seat of Christianity has become a wasteland because of violent, ignorant people. Even the cultural history, most often the pre-Muslim, but also the pre-Christian history of the Middle East is being destroyed in the name of God.

Returning home, unjust laws are passed in New Hampshire that make it difficult if not illegal for the poor to beg. We are told it is because these people are not poor but addicted to opioids. That the money they receive will simply go toward fueling their addictions, not toward the food they likely forget to eat because they are consumed by their addiction. And so we are told not to give. I hear stories about how these panhandlers, predominately white, stand outside places like Wal-Mart with “For Hire” signs in the proverbial windows and how the privileged will drive by telling them to get a job and then massage their conscience by saying they don’t want work, they just want to get high. We forget of course that addiction, or compulsion, or however we are to understand the dependence we human creatures can feel for material things, is an illness that ruins our lives. Renters are forced to go to courts well beyond their place of residence because landlords can file for eviction in courts convenient for them, not their renters. For we sometimes forget that this battle is not just against systemic racism, though it most certainly is that, but also against systemic classism. We need Black Lives Matter when our Alton Sterlings and Philando Castilles are murdered. We also need Poor Lives Matter for the people of Nashua, New Hampshire and everywhere the poor are oppressed by the rich. And before you say it, of course all lives do matter, that is precisely the point. We know that all lives matter precisely when we have to be reminded that particular lives matter. Black Lives Matter proves that all lives matter because if they don’t, believe me when I tell you that it would be, in this country the black lives that didn’t, followed closely by the lives of the poor.

I didn’t intend to write so much. These are just words, words that come out of a place of privilege. I’m white and male. I grew up in an upper middle class home and though I am technically economically poor now that is very much obviated by the generosity and hospitality of family. So these are just words. I don’t even have any actions, or not many. There are things I can do to help the poor here in New Hampshire as a resident of the state, but there is little I can see to do for those in Dallas, for Alton Sterling and his family, for Philando Castille and his, for Trayvon Martin and his, for Freddie Gray and his.

I can and do pray, of course. I pray for their souls, for their loved ones, for their memories. But even prayer can feel trite in times like this. I know because there were times promises of prayer felt trite when my son was diagnosed with cancer. A promise of prayer––though perhaps the prayers themselves did––did not make him well. A promise of prayer will not return the dead to life. And yet, I pray. I pray because this is not how this world is meant to be and it is not how it will be. The Lord’s Prayer or Pater Noster is not just a call to prayer but to action. It is our job to work alongside the Holy Spirit and make God’s Name hallowed, to make his Kingdom and his Will done on Earth as it is Heaven.

Recently, before these recent shootings, a friend preached one of the best sermons I’ve heard in a long time. He was preaching on the book of Amos and focused on Amos 5.24. Adam, my friend, told us of the place this passage of Scripture had in Martin Luther King Jr.’s “I have a dream” speech. King said, “No, no, we are not satisfied, and we will not be satis­fied until justice rolls down like waters and righteousness like a mighty stream.” Adam did a wonderful job of explaining to us what it means for justice to roll down like waters and righteousness like a mighty stream and I strongly recommend you listen to his message. For those who regularly read this blog you will know that I mostly write about light. That is, I write about the Good. Even when I write about political things or about distributism my focus is always on the Good on the Light because so often we need little reminder of the darkness. Even when I write about Faërie or Elfland is this true. And yet we must remember that what makes any of this compelling is that things are not as they should be.

King Arthur’s knights must constantly go and right wrongs for the poor and the oppressed. The Shire had to be scoured after the evils of Mordor and Isengard found their way in. I will still maintain a general focus on the Good, on the Light. But today, this week, this month we need to be reminded of the darkness against which we fight. That hideous strength that sets us against each other, that makes us believe that death and corruption and oppression are right, or are things beyond our control. They are not! They must bring tears as they are in me now, we must feel their effects, we must mourn with those who mourn, but this is not how things are meant to be. This is not the end. We must strive to make the reality that God’s Kingdom is amongst us evident. We must unveil the deeper truths about reality that sin and evil have attempted to hide from us. We must remember that they can no longer remain hidden because Love became a human being for us. He united Divinity to Humanity in a way we can never fully understand, but in a way that allows us, if we let it, to see more clearly. Racism, hatred, bigotry, oppression, these are the lies the devil has fed to us. We must shut our mouths and our eyes and our ears to his lies. Only when we open them in Christ can we weep and work. 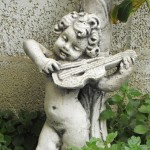 July 9, 2016 Waking Up: Taking Solace in the Escape of Fairy-stories and Awaiting the Return of Christ with Joy
Recent Comments
0 | Leave a Comment
"This is, obviously, very late to the discussion. But I just want to say that ..."
adventurehall The Atlantis Theory: The Numenorean Connection ..."
"I once caught a sockpuppeter with about 30 accounts.Apparently they were an amateur.Kudos, comrade!"
TRE45ON But let justice roll down like ..."
"Seriously? You upvoted yourself twice on Elfland Letters? Really? Sad!"
TRE45ON But let justice roll down like ..."
"https://uploads.disquscdn.c..."
Stephen Gulas What Brought Me to the Catholic ..."
Browse Our Archives
Related posts from Letters from the Edge of Elfland