The “Matter” of Devotion: Further Reflections on the PMR Conference and Christianity as a Matter Affirming Religion

As I mentioned in a previous letter, I recently attended the Patristic, Medieval, Renaissance Conference. The theme for this year’s conference was “A Matter of Devotion:  Matter and Spirit in Theory and Practice.” While not every paper I heard dealt with this issue, it was one that struck me. The idea, in part, was to look at how physical, material objects matter (see what I did there) in our worship of God (whether studied historically or theologically). My own paper (which you can read here) looked at the relationship between the sacraments and the aspects of bodily life they parallel. But this conference reminded me of something more general that I’ve been thinking about lately. Stuff matters in Christianity.

I think this is something that often gets overlooked or mischaracterized. In some churches, it can feel like matter matters not. This is especially true in some Protestant churches. We’re here to save souls (which we conceive of as immaterial) first and foremost. Our bodies matter little. Even the sacraments can be seen as purely spiritual. Christ isn’t “really” present in the Eucharist, he’s either “spiritually” present (whatever that means precisely) or he isn’t present in it at all and Communion is simply a memorial of the Last Supper and the Crucifixion. Baptism isn’t actually a washing away of sin, it’s an outward symbol (that has no real relationship to the thing signified) of an inward, spiritual reality. I remember once being at a confirmation where the pastor was anointing someone with oil and told the congregation that this oil was not special. At the time, it was difficult to contain myself. I mean of course the oil is special. If it weren’t we could have just used cooking oil from the kitchen, but we didn’t. That oil was reserved for confirmations. It was set aside, unique, holy.

Christianity, however, is a very material religion. We can see that from Genesis 1 onward. God creates the heavens and earth. He creates material (and immaterial) reality. It was the gnostics who believed matter was evil (most of them, there is a weird strain who see the spirit as evil and matter as good) and the spirit good. This had varying effects on them, but they all, in their own ways, eschewed material reality because they believed an evil God (the God of the Old Testament) had created it. But that was condemned as a heresy. Instead, Christians must affirm the goodness of material creation, even if we ought also to affirm that in some ways spiritual realities are higher than we are. This does not negate the goodness of creation, of matter, of stuff.

It is realizations such as this one, that matter matters to Christianity, that have led me to higher views of the sacraments (and to recognize that things other than Baptism and the Eucharist are also sacraments). What is more, God showed that he thought matter important precisely by joining himself to it in a new way in the Incarnation. When the Son of God united his divinity to humanity, God gave his ultimate seal of approval on creation. For God so loved the world, not just human being, not just our souls, but the world that his sent his only begotten Son. All of creation is groaning as with birth pangs, awaiting the sons of God to be revealed. Matter matters. And it matters in devotion.

This is probably the hardest thing for many Christians to accept. We might be able to affirm that creation is good, that matter matters, and maybe even that it matters in the sacraments. But to suggest that it matters in other acts of devotion can seem a stretch too far. Icons, prayer cords, rosaries, holy sites, religious statues, relics, religious habits, these can seem a step too far. But I think we must give them due consideration. If it is true that God created the cosmos (material and immaterial) and it was good, and if God further affirmed that by joining himself to created reality in the Incarnation, then I think we must allow for the possibility of these other “sacramentals” as they are often called.

One of the plenary speakers at the PMR Conference, Caroline Walker Bynum, gave a paper on small cribs/beds/manger scenes that were used in religious devotion during the middle ages. While even I must admit that aspects of the devotions utilizing these and other objects (particularly in a story about nuns who had made clothes for statues, or better dolls, of the Virgin Mary), there was something interesting in what she said. Bynum made the point that for these nuns (primarily) creating these clothes or other practices were a means of prayer for these nuns. That is, each stitch in the garments was a prayer. So, when those garments were later stolen by Protestant reformers, the nuns were devastated. Part of their devastation, and here even I think they went too far, was for not properly defending the Virgin and allowing her clothes to be stolen. But I think that part of their devastation was not only for not defending the Virgin, but that in stealing these clothes, it was as if the Reformers were stealing their very prayers. We can, and should, argue over whether or not this specific practice is good. But the underlying point, that they stitched as they prayed and that they saw their prayers as, in some sense, being bound up in these material objects is something I think we must revisit. Because when we look at the world in this way, we can begin to see how God is present in all things, from the lowest, basest form of “pure matter” all the way to the highest of the angels.

Now, I’m certainly not suggesting we all go out and buy baby Jesus or Virgin Mary dolls and start making clothes for them. But I am suggesting that we consider the place and the role of material objects as we pray, as we sing, as we worship the Triune God throughout our day. Matter does matter, and it matters in devotion. 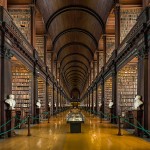 October 24, 2016
Reading on the Edges of Elfland: October 24th Edition
Next Post

October 27, 2016 Not Quite Loving Love, Henri: A Review of Nouwen's Collected Letters
Recent Comments
0 | Leave a Comment
Browse Our Archives
Follow Us!

If You're Angry About the Looting...
Steel Magnificat
Related posts from Letters from the Edge of Elfland