Every Savage Can Dance: Catholic Reflections on High and Low Culture

Eastertide
23 May 2017
The Edge of Elfland
Hudson, New Hampshire

I’ve been reading Jane Austen’s excellent Pride and Prejudice (as well as watching the BBC miniseries) with my juniors at Holy Family Academy. Because of this, I’ve been reminded of a line uttered by Mr. Darcy early on. When asked if likes dancing, Darcy answers in the negative, but his interlocutor is not abashed. He continues on:

“‘What a charming amusement for young people this is, Mr. Darcy! –– There is nothing like dancing after all. ––I consider it one of the first refinements of polished societies.’

“‘Certainly, Sir;––and it has the advantage of being in vogue amongst the less polished societies of the world.––Every savage can dance.'”

What Darcy intends as slight, however, I think highlights an important point I tried to make in yesterday’s letter. It is not the high that is extraordinary, it is the ordinary. I’ve written on this before, but I feel it bears repeating. The common is the uncommon, the ordinary the extraordinary. Chesterton was a chief defender of the common. In his book, Orthodoxy, he wrote:

“The first is this: that the things common to all men are more important than the things peculiar to any men. Ordinary things are more valuable than extraordinary things; nay, they are more extraordinary. Man is something more awful than men; something more strange. The sense of the miracle of humanity itself should be always more vivid to us than any marvels of power, intellect, art, or civilization. The mere man on two legs, as such, should be felt as something more heartbreaking than any music and more startling than any caricature. Death is more tragic even than death by starvation. Having a nose is more comic even than having a Norman nose.”

I feel this is the thing we must remember. As I said yesterday, feasting, dancing, singing, mourning, weeping, worshipping, all of what truly matters in human life belongs chiefly to the common man. It is not that the high does not exist. Classical music is a higher form of music than folk, but this does not negate the primacy of folk music. Many classical composers took their themes from folk music, and sometimes folk music took its themes from classical. There is one story of a composer who took what he thought a folk melody and composed a classical piece around it. What this composer (whose name escapes me) did not know what that the folk melody itself was taken from a different classical piece. What is key in all of this is not only the primacy of the folk, but the relationship between the folk and the “classical” or whatever name one gives to the “high” culture.

We can see this reality particularly clearly in Christianity. Whether one looks at how Christ himself associated with the poor and the marginalized of society; or how Christianity initially spread through women and servants and slaves in the early centuries; or how popular piety led to the doctrine of the immaculate conception. So many things begin at the most common level, or else the common, we might even call it the hillbilly or rustic, is itself informed and changed by the “high” as seen in my story about the composer (if you know who I’m talking about please enlighten me; I believe it may be Vyacheslav Grokhovsky and his “Gypsy Rhapsody” but I can’t seem to locate the story). The folk gives rise to the classical which gives rise to the folk which gives rise to the classical.

One could give innumerable examples and innumerable reasons for upholding the folk, the rustic, the hillbilly sensibilities. But, as I noted at the beginning of this letter, the chief thing is the rustic’s vulgarity and by that I mean his commonness. The common is what is truly uncommon––like bread and wine, like a tree, like a husband and wife––the ordinary is the extraordinary. Every savage can dance. 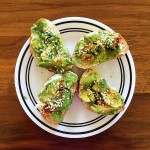 May 22, 2017
Avocado Toast? Or A Millennial Snowflake's Snowflakish Reflections on Being Millennial and Catholic Social Teaching
Next Post

May 24, 2017 Heaven and Earth Are Full of Your Glory: Sophiological Reflections on the Immaculate Conception and Isaiah 6:3
Recent Comments
0 | Leave a Comment
Browse Our Archives
Related posts from Letters from the Edge of Elfland