The Life and Death of My Tattoo

The Life and Death of My Tattoo August 6, 2012 Ellen Painter Dollar

A couple of weeks ago, I decided to get a tattoo.

This idea came out of nowhere, but immediately made sense. I realized a tattoo could be a great way to honor my body—my crooked and broken body that has nevertheless borne and cares for three children. For once, I would do something to draw attention to my body instead of away from it.

I began discussing this idea with some Facebook friends, as I thought about what illustration would communicate my motivation for getting a tattoo—the idea that crooked and broken things can be vehicles of wholeness and healing, that redemption and goodness can come from pain and brokenness. I ultimately decided I would ask an artist friend to use one of the photos that scrolls through my web site header as the basis of a tattoo. The photo is of a tree that, at some point, was broken off at the trunk, but kept growing anyway. It is a portrait, to me, of how something can be broken and forever changed, but not defeated, and how the broken places are incorporated into a new vision of wholeness and beauty. This photo embodies the “crooked way of grace,” which is part of my blog tagline as I explain here. 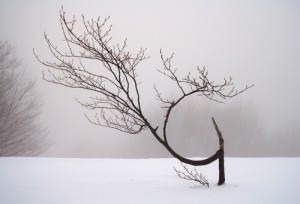 Then I decided  to make the tattoo a reward down the line for losing some weight and exercising more. The tattoo would honor my body for what it is as well as what it can be if I take good care of it.

This seemed like such a good idea. I wondered why I hadn’t thought of it before.

Then, as we watched the Olympics last Saturday night, I mentioned to my daughter Meg that I’m planning to get a tattoo. She didn’t believe me. She said I was lying. She laughed and laughed at her mom’s silly joke. Nothing I said could convince her that I was serious. Gradually, though, as I stuck to my story, she began to suspect that I wasn’t joking. I was serious.

And as I lay there, preoccupied with a round of Words with Friends, I realized that Meg was sobbing. When I asked her what was wrong, she said, “Mom, you CAN’T get a tattoo! You TOLD us they aren’t a good idea because if you want to get rid of it, it will HURT. You CAN’T!!!!”

Now, Meg is a girl of volatile emotions who is very capable of using tears to manipulate me. She does it all the time. But this time, her tears were genuine. And I suddenly realized  why she was sobbing. She felt betrayed.

I have told Meg and her siblings that, while they will ultimately be old enough to make all of their own decisions about their bodies, I hope they will think long and hard about those decisions. What seems like a great idea for a 16-year-old might not seem like such a great idea months or years later, when the consequences of what you do to or with your body might weigh more heavily. This is true whether we’re talking about the relatively minor consequences of a tattoo or piercing (bearing a tattoo image you no longer like, or a hole where you’d rather not have one) or the more significant consequences of eating poorly or having careless sex (illnesses and diseases, the nagging sense that your worth is tied up with whether or not someone else thinks you’re pretty or wants to sleep with you, a baby when you’re not ready to have one). I have explained to my children that some decisions we make about our bodies cannot be undone without great pain, and I have, on more than one occasion, mentioned tattoos and their literally painful removal to illustrate this point.

So from Meg’s perspective, I had lost my mind. I was failing to heed my own advice—advice that Meg had accepted as TRUTH as an eight-year-old will. I was not merely failing to heed it, but I was casually talking about failing to heed it with a smile and laugh, as if it were no big deal.  To Meg, that felt like a betrayal.

I remembered an episode when I was in my early 20s, working for a nonprofit social service agency in Washington, D.C. The agency worked with homeless and other low-income folk to help them take whatever steps would lead them to a better life, whether those steps involved addiction treatment, additional job training, or simply getting some decent clothes and a couple of weeks’ bus fare, so they could get to and from a new job before a first paycheck. We did not provide emergency assistance of money, food, or anything else. As a result, we frequently had to tell participants that they either needed to follow through on their “next steps” or go elsewhere for help.

One day, both of my supervisors—women I admired for their wisdom—told me we needed to continue providing services to a young man who had consistently failed to follow through on his next steps. I don’t recall the details, but my supervisors were women of integrity, so I know they had good reasons for agreeing to continue working with someone who wasn’t doing what he was supposed to be doing. But I had embraced these women’s vision for what we were about. And it felt that they were suddenly telling me that the truths they had hammered into me about what our agency did and did not do weren’t really true, that the rules they had convinced me to work by could be bent. I felt confused. I felt betrayed.

Last Saturday night, I realized that Meg was feeling confused and betrayed in the same way I felt confused and betrayed by my supervisors many years ago. She had trusted and embraced my vision for how we are to treat our bodies and make decisions about them, and suddenly I seemed to be telling her that an opposite vision was okay too.

Do I have every right to get a tattoo even though it has upset my eight-year-old? Of course. One day, will a more mature Meg be better able to understand why a mother would both advise her children to be cautious of getting a tattoo and also decide to get one herself? Of course. And one day, will my opinions about what makes for good and bad decisions have far less power for my children than they do now? Oh yes.

But I told Meg to stop crying. I told her that she was right—I did tell her that getting a tattoo is potentially unwise because you can’t undo it without pain. I told her I won’t get a tattoo.

In the larger scheme of things, the discussion of my potential tattoo is a minor blip in our family life. But with the teen years approaching for Meg and her siblings, I decided to err on the side of being the constant mom, the mom whose messages about how we treat ourselves and others stay the same regardless of circumstance, the mom who values boring but reliable consistency over titillating but short-lived adventures.

When I announced the tattoo would not happen, Meg dried her tears, breathed a sigh of relief, and snuggled in next to me to watch some more Olympics. And I realized that, ultimately, she and my other two kids are all I need to affirm that from a broken body can come all sorts of wonderful and worthy things. I don’t need a tattoo to prove the crooked way of grace when I’ve got them.

August 8, 2012 Does Prenatal Testing Equal Eugenics?
Recent Comments
0 | Leave a Comment
Browse Our Archives
get the latest from
Ellen Painter Dollar
Sign up for our newsletter
POPULAR AT PATHEOS Progressive Christian
1