Freedom Looks Like a Little Boy in Sparkly Leggings 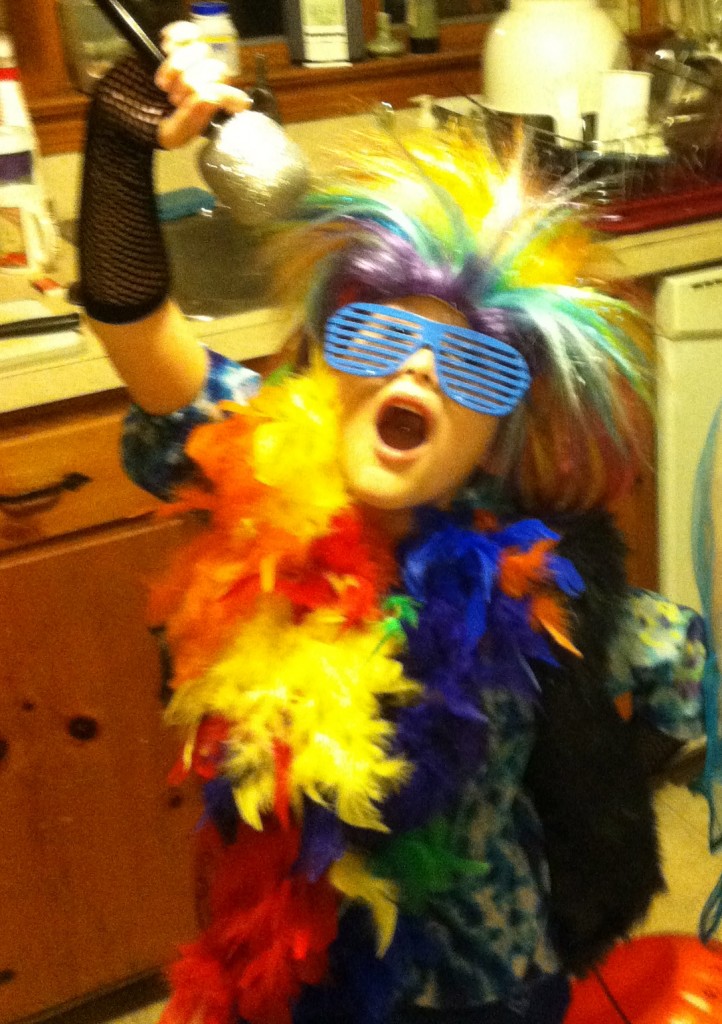 My son’s Halloween costume—a rock star in the Freddy Mercury/Kiss/Steven Tyler over-the-top mode—was absolutely perfect for him. Not because he loves to sing and dreams of being on American Idol, although he does. But because this costume offered him freedom. Freedom to wear the sparkly, colorful clothes he would like to wear every day, but doesn’t because he knows they will elicit comments from others, most commonly, “Why are you wearing girl clothes?” Freedom, for one day, to be who he is without having to worry what other people think.

My novelist friend Matthew Dicks just released a wonderful book, Memoirs of an Imaginary Friend, which focuses on a little boy named Max with some type of autism/Asperger-type syndrome. Max’s imaginary friend, Budo, recognizes that going to school every day to meet expectations he doesn’t understand and that require him to mask his deepest self makes Max the bravest boy he knows. At his book signing, Matt Dicks said something to the effect of, “We adults spend a lot of time telling kids to be themselves and celebrate who they are. And then, when kids fail to conform to expectations, we punish them for it.”

I thought of my boy when he said that. My boy who reveled in being able to don sparkly blue leggings, a flowing flowered shirt, and fur vest for his Halloween costume, because he knows that wearing such clothes on a regular school day would ensure perplexed questions at the least, and teasing at the worst. A boy who owns a single shirt purchased in the girls’ department and gets comments from other kids every time he wears it. The shirt is gray, with a picture of a the Eiffel Tower, a dog wearing a pink beret, and two croissants that look suspiciously like dog poop. It’s not a feathery pink boa, for goodness’ sake. It features a poop-like substance. And yet, every time he wears it, he has to weigh the consequences, whether he is up to dealing with the fallout of being a boy who prefers glitter to camo, American Girl dolls to Bey Blades. A boy who, this morning, made a last-minute change to the item he planned to bring for show-and-tell, replacing his socially acceptable Build-a-Bear with one of his many fashion-focused dolls. If that isn’t a brave move for a first grade boy, I don’t know what is.

My boy and I have far too many conversations about the careful line he must walk every day. I tell him I will buy him the clothes he wants within limits (a girls’ red puffy winter coat—OK; glittery pink sneakers—not OK). I tell him that my limits are simply there to protect him from those who will not understand. I tell him that he can wear some subtler items of girls’ clothing—the dog shirt, the coat, the silver snow boots—so long as he feels able to deal with the inevitable push-back he will get from his peers’ scrutiny.

I feel like I am betraying him every time I help my son figure out how to finesse his identity for social acceptance, how to “pass.”

I have no idea what my son’s penchant for dolls and sparkles mean for his ultimate adult identity. Too often, even well-meaning adults insist on sexualizing little boys who want to wear nail polish or choose a ballerina tutu for their Halloween costume. As the writer Catherine Newman has said of her 13-year-old son who wears his hair long and dyed pink,

My own blog shows common search terms that people type in about it, and one of them is always some variation on “Catherine Newman son gay?” Of course, I’ll be happy whether Ben turns out to be gay or straight. But his stylishness notwithstanding, he is currently as gay or straight as your average kitchen table; Ben is more likely to marry our cat, or the board game Settlers of Catan, than he is a man or woman.

I recently read that parents who want their non–gender-conforming sons to experience a week of blissful freedom sign them up for special camps where they can play with like-minded boys while wearing skirts and sparkles. And while I get that, while I understand wanting your son to have a week or two of the freedom my son had on Halloween, freedom to show himself to others as he is, these camps also piss me off. Because my nearly 13-year-old daughter doesn’t have to go to a special camp to wear the Gap boys’ rugby shirts she favors. She wears them, with jeans and sneakers and a leather bracelet, to that infamously judgmental place called middle school. And no one says a word. A few other girls dress similarly. And it’s all okay.

I suspect this double standard has to do with our culture’s long, long history of sexism. That a girl dressing like a boy and preferring “boyish” toys like trains and dinosaurs is perceived as “trading up” by modeling the stronger, more accomplished gender, while a boy dressing like a girl and preferring “girlish” toys like dolls and dress-up is perceived as “trading down” by modeling the weaker, less competent gender.

So I won’t be sending my boy to a special camp so he can wear the clothes he favors. I’ll continue to help him express himself publicly in subtle ways that might protect him from becoming bully bait, while allowing him to play with whatever toys he wants and wear whatever clothes he wants in the safe bubble of our home. I will strive to raise a son who turns out like a teenaged boy I saw in the outpatient surgery waiting room a few weeks ago when I was there with my daughter. This boy was dressed androgynously (and impeccably) in leggings, vest, scarf, lace-up black boots, and some subtle make-up, including eyeliner. He sported a carefully sculpted puff of hair on top of his head, with the sides shaved. I noticed him not just for his taste in clothing or unusual hairstyle (“Your brother would love this kid,” I whispered to my daughter, and she nodded), but also for his obvious comfort in his own skin. He joked with his mom. He looked nurses in the eye when they spoke to him. He greeted everyone with a warm smile. Clearly, this is a boy who knows who he is, who has been allowed to be who he is, and who is thriving as a result. I want that future for my son.

On Halloween, my son and I had a glimpse of that future. He was free to be who he is, I was free to let him, and everyone else was free to applaud his creativity and exuberance without judging his clothing choices as subversive to the accepted social order. Besides, a social order that overvalues conformity based on subjective and changeable cultural norms, and asks people, starting with children, to deny and hide who they are is one that deserves to be subverted.

October 30, 2012
What We Can Learn from Johnny Appleseed
Next Post