What Hobbits Have Taught Me About God’s Providence

My husband and I are Lord of the Rings movie junkies. I believe I could re-enact the entire Helm’s Deep battle sequence in The Two Towers, if only I had the muscle strength and dexterity to, say, mimic Legolas’s tossing of his dwarf pal Gimli across a chasm at a signal moment in the story. We have apparently passed our love of Tolkien’s fictional Middle-earth on to our oldest daughter, who plans to celebrate her upcoming 13th birthday by taking friends to see The Hobbit on opening night. 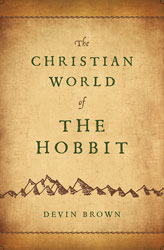 Our love of the films started, of course, with a love of the J.R.R. Tolkien books on which they are based. I’ve always known that Tolkien was a committed Christian, and I’ve always known that the main reason I love his tales of fantastic creatures in a fictional world is that they speak so deeply to my own faith. But I would have had a hard time, until now, articulating why and how Middle-earth and its inhabitants embody the fundamentals of Christian faith. After reading Devin Brown’s lovely new book The Christian World of the Hobbit, I better understand how this fantasy world of hobbits and elves, wizards and magic, orcs and evil so beautifully presents a Christian way of seeing the world and our place in it.

There is no religion per se in Middle-earth. No one names or prays to God, no one worships. And yet, from the first pages of The Hobbit through the last pages of The Return of the King (including Tolkien’s extensive appendices), there is a benevolent unseen hand at work—a hand whose presence is providential (this unseen force helps ensure that the right things happen at the right time to aid the ultimate triumph of good over evil), who calls characters to fulfill specific purposes (the hobbits Bilbo and Frodo Baggins both realize at some point that no one else can do the job they have been chosen to do, even though they don’t want to do it), and who rewards those who make moral choices (such as sparing an enemy’s life or forsaking material riches when they are ill-gotten).

Of all the facets of Christian faith, I struggle most mightily with how God is involved in the daily events of our lives, major and minor, life-changing and mundane. I have a hard time with the idea of providence—that God orchestrates circumstances, might even intervene in my life to make sure an outcome is good, when so many suffering souls on this planet and in the sweep of history have never, ever gotten a lucky break. (Brown points out that while Middle-earth characters frequently cite “luck” as behind fortuitous circumstances, they often do so with a twinkle in the eye, as if they know better than to ascribe key moments in the battle for Middle-earth to mere luck.) To me, the idea that God can and does, at least sometimes, provide exactly what we need when we need it forces the question of why God doesn’t provide everyone with what we need when we need it all the time. Looked at this way, providence seems a fickle and unjust way to manage the world.

Critics have complained that in Tolkien’s world, it’s not so much that the good folk triumph over evil, but that lucky things happen just in the nick of time, through no one’s action. But Brown explains how providence is contingent on characters’ good intentions and morally upright decisions. For example, the king-to-be Aragorn decides to put off searching for two captured hobbits so he can give a proper burial to a fallen comrade, but worries that he has made the wrong decision. Gandalf the wizard consoles him by saying, “Do not regret your choice….nor call it a vain pursuit. You chose amid doubts the path that seemed right; the choice was just, and it has been rewarded.” How was it rewarded? The two hobbits are carried by their captors to a place where they can rally new forces to Aragorn’s cause, and thus provide key resources for an important battle. Likewise, once Bilbo Baggins the hobbit decides to spare the life of Gollum—a pitiful creature who represents what becomes of those who allow greed and selfishness to dictate their decisions—he suddenly has an idea for how to escape from Gollum, and the strength to carry it out.

Providence is therefore not about the unseen hand/God randomly waving a magic wand at whim to make things easier for hobbits/people whenever he feels like it. Rather, it is about our inviting the unseen hand/God to intervene (even if we don’t know we’re doing so) by making the more just, righteous, selfless choice. Somehow, God’s intervention in our affairs is magnified and enabled by our willingness to respond to God’s call and make decisions in line with God’s just and loving character. We make room for God to act when we act as God wants us to.

This making room, this providence, happens even if our best effort isn’t all that good. The most appealing thing about hobbits is that they are utterly normal, which is to say they can be lazy, petty, and overly concerned with their own physical comforts. Yet the unseen hand uses these utterly normal, small, breakfast-obsessed folk to bring about the defeat of evil in Middle-earth.

I still have lots of questions about how God does or doesn’t work in the world, and particularly why so many good people so often fail to have fairly obvious needs filled. But since reading Devin Brown’s explanation of how the providential world of Middle-earth works, I find myself more open to the idea that God can and does intervene in the world, and that it is okay to ask God for help—for specific, real, substantial help—and even to expect God to provide it. I must also understand, of course, that God’s help often comes hand in hand with God’s expectation that I actively choose good (mercy, justice, gratitude) over evil (revenge, hate, self-absorption). This notion of God acting in concert with our own right action is a consistent theme in scripture:

“Seek first God’s kingdom and God’s righteousness, and all these things will be given to you as well” (Matthew 6:33).

“…it is God who works in you to will and to act in order to fulfill his good purpose.” (Phillippians 2:13)

“Now may the God of peace, who through the blood of the eternal covenant brought back from the dead our Lord Jesus, that great Shepherd of the sheep, equip you with everything good for doing his will, and may he work in us what is pleasing to him…” (Hebrews 13: 20–21)

And my favorite: “And we know that in all things God works for the good of those who love him, who have been called according to his purpose.” (Romans 8:28)

In the stories of his strange and fanciful characters, J.R.R. Tolkien has given us a powerful antidote to the modern notion that “this world is all there is …and that life has no inherent meaning or purpose.” (p. 180 in The Christian World of the Hobbit). Devin Brown, in his short and straightforward little book, has shown us how a world saved by hobbits and their elf, dwarf, and wizard comrades, chosen by an unseen force to fulfill a great purpose, can illuminate how we are called to do likewise in our own world.

This post is part of a Patheos Book Club Roundtable discussion of Devin Brown’s new book, The Christian World of the Hobbit.