Bless Those Who Curse You (& Don’t Call Them Eugenicists, Moral Monsters, or Murderers)

A friend recently sent me an article written by an Australian man who has the same bone disorder I do (osteogenesis imperfecta, or OI). Writing for the Christian journal First Things, Philip C. Burcham tells a compelling story of his family’s OI history. Seeking promising new treatments for his daughter, who inherited OI from him, the family visited a top Australian OI expert. Instead of focusing on how he might help Burcham’s daughter thrive with newer treatments, the doctor asked Burcham and his wife if they planned to have more children and suggested they undergo DNA testing. The doctor’s primary goal soon became apparent:

Waving a dismissive hand toward our daughter, who until this point had tried her darndest to win the doctor’s attention with coy smiles and giggles, this gifted physician who knew so much about the disease abruptly replied, “We want to ensure you don’t have another one of those!”

The prevalent bias in the medical community toward doing everything necessary to avoid having babies born with genetic conditions is well-documented and deeply troubling. Burcham’s witness, as a thriving person living in a thriving family affected by OI, is sorely needed in a world where many voices clamor that good parents and good citizens will do everything in our power to ensure that we have only intellectually and physically robust children.

But when my friend sent it, I skimmed the article, then closed my browser window and promised myself I would read it later, on a less tired or stressed day, when I felt able to read without anger. It took me more than a week to go back and actually read every word carefully.

Anger?? What’s that about? Why the hesitation to read a story that resonates with my own, that brings up important issues concerning dignity, disability, and choice?

Because when I first skimmed the story, one word, repeated several times in reference to the ill-informed doctor, jumped out: eugenicist.

Burcham, in labeling the doctor with this powerful label, accuses him of practicing an abhorrent philosophy whereby we seek to improve human society through targeted efforts to prevent people with “undesirable” genes from reproducing and/or encourage people with “desirable” genes to reproduce. Eugenics is both a philosophy and a pseudo-science, practiced most famously by the Nazi regime but also through programs such as sterilization of people with mental illness and immigration policies preventing people of certain ethnicities from entering a country to live and work.

Perhaps the doctor Burcham saw is indeed a neo-Nazi. Perhaps he has written scientific papers arguing for why large-scale efforts to disallow people with genetically based disabilities from reproducing would be the best thing for human society.

I am not condoning the doctor’s insensitive and wrong-headed remarks. I share Burcham’s concern with the bias that Western medical practice  exhibits, in which practitioners from physicians to ultrasound techs assume that the most desirable outcome for everyone, including patients living fruitful lives with genetic conditions, is the birth of babies without genetic conditions that affect physical, cognitive, or emotional development.

And there are people taking part in our cultural discourse around disability and technology who do deserve the label “eugenicist,” because they are purposefully advocating a philosophy whereby ridding the population of problematic genes and/or promoting the propagation of desirable genes will result in a “higher quality” human population. Last year, for example, I stumbled upon a blog post with the title Ellen Painter Dollar is a Moral Monster. The writer was accusing me of moral monstrosity because of my decision, as outlined in my book No Easy Choice, to have three biological children in spite of the 50 percent chance they each would inherit my bone disorder. The writer’s blog was dedicated explicitly to arguing for widespread genetic screening tools to rid the population of “undesirable” genes. Now that is eugenics. (The writer, by the way, initially changed the title of his blog post, and ultimately removed it altogether. This may or may not have been the result of my sharing the headline with my Facebook community, which raised the ire of many, including some particularly articulate and feisty friends who also have OI.)

Burcham’s doctor is guilty of unquestioning acceptance of the prevailing medical narrative that the sole rational, desirable goal of any pregnancy is the birth of a child without any known genetic abnormalities. But there is no evidence in the story Burcham tells that he is guilty of an encompassing philosophy whereby he sees genetic screening as a tool in the “improvement” of the human race.

By labeling his daughter’s physician a eugenicist, I believe Burcham has gone far—too far—beyond telling his family’s compelling story. He has drawn lines between the good guys and the bad guys. He has moved from story telling to preaching. He has told a morality tale, in which there is a clear enemy that must be defeated.

I am more and more convinced that in our fraught conversations around disability, genetics, flourishing, suffering, and reproductive choice, we do not need morality tales. We do not need stories that simply laud certain decisions and criticize others. Our conversations on this subject remain fraught, and largely fruitless (that is, not moving us toward any sort of consensus around what choices should and should not be offered to prospective parents) precisely because of how powerfully so many people believe they know which decisions are laudable and which are dangerous. When people enter a conversation already convinced of what is right and wrong, their ability to hear and really engage the others contributing to the conversation is diminished.

Further, by calling the doctor a “eugenicist,” Burcham has dehumanized him. He has presented the doctor not as a flawed human being in need of some eye-opening education on life with OI, but as…a moral monster. I know how this feels. Besides a moral monster, I have been called a number of things because of the reproductive decisions I made and my refusal to say that reproductive technologies and genetic screening are absolutely right or wrong.

A murderer. A eugenicist.

Being called such things hurts. In calling me such names, people are rejecting everything I have to contribute to conversations around the messy questions raised by medical technologies simply because they don’t agree with my conclusion (which is, basically, that I don’t have any conclusions other than that there is a dire need for compassionate listening and conversation). They are rejecting up front my most valuable contribution to these conversations—my story.

Like any story that is true, my story is messy. It is complicated. There are no obvious rights and wrongs. No clear villains or heroes.

That doesn’t stop people from wanting to make my messy, murky story into a shiny, simplistic morality tale, in which my husband and I, after going through one unsuccessful cycle of preimplantation genetic diagnosis (PGD) to try to have a second baby without OI after our first was born with it, “saw the light” and abandoned PGD. We did abandon PGD, and went on to have two more children conceived naturally, but not because of anything nearly as stark and clear as a light. 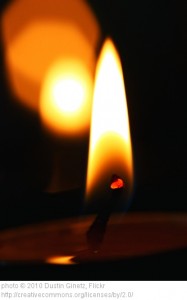 As Christians whose scriptures are a treasure trove of messy, complicated (that is, human) stories, we should know better than to cheapen our own stories by recasting them as morality tales, with radiant shafts of light revealing good and bad, right and wrong, hero and villain (or in this case, eugenicist). Our scripture also reminds us that we see as in a mirror, dimly. Any story that fails to acknowledge that dimness, that murkiness, is a story I have difficulty trusting.

And finally, another scripture comes to mind:

But to you who are listening I say: Love your enemies, do good to those who hate you, bless those who curse you, pray for those who mistreat you. (Luke 6:27)

If we are to make any progress in evaluating the promises and pitfalls of reproductive technology, if we are to hold up the Christ-like way of acceptance and nurture of those who are fragile in the face of technological solutions to every human frailty, then we must invite into our conversations those who have embraced those technological solutions without adequate critique.We must bless those who seem to be cursing us for our alleged imperfections by hearing their stories, so we can better understand the source of their ideals. We need to invite them to see the blessings that our lives can be and are, so they can understand why we find their ideals so very threatening.

March 6, 2013
How the Story of a Surrogate, Expectant Parents, and a Baby Reveals the Pitfalls of Repro Tech
Next Post

March 11, 2013 When Conflicting Stories Are Both True: Illness, Identity, and the Tales We Tell of Living with Disability
Recent Comments
0 | Leave a Comment
Browse Our Archives
get the latest from
Ellen Painter Dollar
Sign up for our newsletter
POPULAR AT PATHEOS Progressive Christian
1

QAnon is a hoax designed for...
slacktivist
Related posts from Ellen Painter Dollar