[Me & My Naturopath] Why I’m a Hopeful Skeptic

Fed up with my increasing impairment due to chronic pain, I went to see a naturopath last week. I left her office with plans and recommendations for a five-pronged approach to lessening my pain, and increasing my strength and function:

3. An anti-inflammatory diet (such as this one).

4. Daily use of supplements (such as vitamins, fish oil, and herbs)

5. Some psychological counseling, to explore whether and how stress and anxiety might be affecting my physical state.

As of this writing, I’ve had two acupuncture sessions, been following the anti-inflammatory diet about 90 percent of the time, and have had one yoga class. It’s still early in the game to know if much is changing. I’ve had a back injury for about two weeks, and initially, my back felt worse the day after my first acupuncture. But by two days later, not only was my back feeling better, but I felt a sensation of lightness, of energy flowing more easily, of being able to walk and move about without holding my breath when something hurts or feeling the effort of each step intensely.

By far, the most beneficial part of this new endeavor is the sense of being truly seen and heard by my naturopathic doctor in a way that I rarely feel with my other doctors. I have some wonderful doctors, and trust them deeply. But they are generally focused on one aspect of my care (my osteoporosis, a particular injury, my chronic pain), and not on me as a whole person, including how I spend my time, what I eat, how I deal with stress, etc. They are generally focused on a particular goal for each appointment, such as assessing the latest lab numbers or writing the correct prescription. When I see my naturopath, the goal is broader—to talk about how I’m feeling and functioning in a bigger sense. Am I feeling well? Am I able to do what I need and want to do without excessive pain and struggle? Do I feel that these new techniques are making a difference? 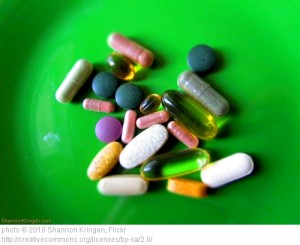 That said, I am still a little skeptical of whether and how all this works. I am particularly skeptical about the anti-inflammatory diet. As diets go, it appears to be a good one, in that it emphasizes the basics of what we all know makes for a healthy diet: lots of fresh produce, whole grains, healthy fats, minimal sweets. But I’m still hesitant to embrace a diet that leaves out or severely minimizes entire groups of foods, such as dairy or breads made with white flour or meat or anything with gluten. (Although the basic anti-inflammatory diet is not necessarily gluten-free, and includes whole-grain pasta, many people, including my naturopath, think gluten-free eating should be pursued when you’re dealing with certain types of inflammatory illnesses, such as my arthritis.) I’m leery of any diet that doesn’t see a hunk of freshly baked baguette spread with butter, or a savory meat-based spaghetti sauce, or my fabulous chocolate fudge cake, as good things, gifts stemming from the earth’s abundance, thousands of years of human culture and relationships built around hearth and table, and ultimately, a loving God. Moderation in eating such rich offerings is reasonable; cutting them out entirely is not….at least to me.

Our culture, weirdly inclusive of overweight processed-food junkies and foodies of one kind or another, devoted to locavorism or fine restaurant-quality cuisine or particular diets ranging from raw foods to gluten-free, tends to do three things to food:

We demonize certain foods, such as red meat, gluten, sugar, white flour, or anything cooked instead of raw, and preach complete purging of these foods from our diets with the zeal of a preacher performing an exorcism. This leads us to become blind to the goodness in many traditional foods, like that baguette with butter, that have deep cultural and familial roots. Such foods bring people together. They link us with our ancestors who ate the same things, as well as with our family and neighbors, because who doesn’t love a fresh-baked piece of bread with butter? They taste good.

We medicalize food, engaging in what food activist and scientist Marion Nestle calls “nutrient-by-nutrient” assessment of food, basing our choices entirely on the vitamins, minerals, and other nutrients contained in particular foods and their effect on our bodies. We treat food as medicine that will cure our particular ills, rather than as a gift that we receive and then share as a way of caring for ourselves and others. (It just occurred to me, in reading this sentence over, that one overarching concern in medical ethics today is confusion over whether medicine’s primary goal is cure or care. While curing someone of a disease is certainly one way to care for him or her, our technologically oriented medical culture often emphasizes cure at the expense of care. Examples are drastic measures to prolong the life of a dying person, rather than helping him or her to die well, with minimal pain and with the loving care of family and medical providers. Or the reproductive technologies that are my area of expertise, in which efforts to cure (really, eliminate) certain genetic disorders via pre-embryonic genetic screening can undermine efforts to care for children and adults with those disorders by celebrating who they are and providing the supports, accommodations, and care they need, which are too frequently labeled as “burdensome” to families, schools, medical providers, and the wider society. Confusion around the proper place of curing and caring is a common phenomenon, whether we’re talking about diet or medical care.)

We individualize food, crafting diets that emphasize certain foods and exclude others, drawing strict lines between which foods we will and won’t eat. People with certain disorders of course, such as celiac disease, have no choice but to say, “I can’t eat such and such.” Likewise for those with food allergies or who have discovered through trial and error that, for example, dairy foods cause rashes or other ills that disappear when dairy is cut from the diet. But for the rest of us, this isolated, individualized approach to food not only leads to self-absorption, but stymies the possibilities for fellowship around the table. Try hosting a dinner party when you are inviting some people who don’t eat white flour, others who eat gluten-free, some who won’t touch dairy, a few who will only eat organic, a vegan or two, and a Paleo dieter. The meal is likely to be highly stressful for the host, and not terribly tasty, particularly if the host is an average home cook without a huge repertoire or a great deal of kitchen creativity.

All this demonization, medicalization, and individualization takes the pleasure out of cooking and eating for many people, and makes it hard for us to connect around cooking and eating. Pleasure and connection are, I believe, two of the primary purposes of food, and I believe God made things that way on purpose. Our modern attitudes toward food also tempt us to believe we have ultimate control over our bodies and our health, if only we choose to eat the “right” things (the dangerous corollary to this idea is that those who are not 100 percent healthy must be eating the wrong things, leading to a culture of blame and shame).

This week, someone posted on Facebook the testimony of a woman who believes she cured her breast cancer by eating raw foods. So many things about her story exemplified, to me, the dangers of our current attitudes toward food. First, an entirely raw foods diet essentially tosses out several thousand years of human culture and foodways as irrelevant. But more troubling, the writer transformed her story into a morality tale, complete with villains (traditional doctors) with evil potions (chemotherapy), claiming that she is sure that, if she had done chemotherapy, it would have killed her. She closes by insisting that, if we only paid attention to the power of food, we could all heal ourselves, just as she has.

One of the mixed blessings of having a genetic disorder is that I’ve known, from an early age, that I cannot heal myself, no matter what I do or eat. And it grieves me to know that the false message that we can heal ourselves from whatever ails us, so long as we do the right things, leads more likely to shame, guilt, anger, and bewilderment (when despite our best efforts, the most stringent diets, the most heartfelt prayers, we don’t get better) than to true healing, which recognizes that life is more than the body and health is more than having great numbers on your annual blood work and not having cancer at the moment.

Theologian Stanley Hauerwas said to me in our meeting a few weeks ago, “People today are desperate for anything that will get them out of life alive.” Indeed.

So I’m a little skeptical of my new naturopathic journey, particularly of the diet. But I’m hopeful too. And I have a good sense about my naturopath’s overall attitudes toward food. When she mentioned that the diet is low on dairy, I mentioned that I would really miss Greek yogurt. She responded, “Then eat your Greek yogurt. Food is about pleasure too, after all.”

This is the first in an occasional series called Me & My Naturopath that will discuss my experience with alternative medicine, or naturopathy. Anything that I share in these posts is a reflection of my experience and does not constitute medical advice. Please consult your own medical care providers before adopting any new practices, diets, or techniques.

And if you want a much more thorough treatment of food, health, gratitude, and God, read my friend Rachel Stone’s new book Eat With Joy, which I will write about here next week. On her blog this week, Rachel writes about her struggle with an eating disorder and how she eventually came out of it by understanding that God intends food for pleasure and connection. Rachel writes:

Eventually, I learned at least two things about God and food: First, that God, much like my grandmothers and great-grandmothers, loves to feed people with good food and watch them enjoy it; and, second, that God is pleased not by my asceticism, or by my efforts to get “my best life now” and to “expand my borders” while contracting my waistline, but instead, by my hospitality. By my willingness to eat, as Jesus did, with people different from me; by efforts, big and small, toward justice for those whose quality of life is impoverished by the endless expansion of portion sizes and fast-food market shares. I found that the urge to binge secretly subsided as did the urge toward pious asceticism. I learned that the secret to finding happiness — or joy, which is better — isn’t in reaching for it, but in reaching toward others.