[Me & My Naturopath] When Nothing Works

[Me & My Naturopath] When Nothing Works June 27, 2013 Ellen Painter Dollar

This is the third post in which I discuss my efforts to deal with chronic arthritis pain through naturopathy. Read the first and second posts here and here.

I went to a naturopath in March hoping—believing—that something would help. Knowing that other people with OI (and many other conditions) swear by acupuncture for relief, I thought it might help me. When my naturopath told me that I tested low for Vitamin B12, which is associated with mood and response to pain, and that she expected B12 supplements to make a measurable difference, I gratefully consumed those supplements. I took it along with half a dozen other supplements every day. I started going to yoga. I even agreed to try a last-ditch remedy proposed after my naturopath, as frustrated as I was, called in a colleague. The colleague suggested some homeopathic concoctions. I forked over $60 to order three small vials before reading up on homeopathy. Which was a mistake (buying before reading, that is). Most homeopathic remedies, it turns out, don’t even contain the substances that are supposed to be therapeutic because they are so diluted. Homeopaths believe that the water and alcohol left behind somehow “remember” the substances being there, and in this memory there is therapeutic value.

Bottom line: My medications are still the only thing that provide reliable, measurable relief from my arthritis pain. Yoga is a good form of exercise, so is beneficial simply as another way of keeping my body moving. Nothing else provided any relief whatsoever. Acupuncture itself was pleasant at first; I got to lie in a warm, quiet room for 20 or 30 minutes. But as the weeks went by and I saw no difference in my pain levels or function, I became impatient with lying in a warm, quiet room as the precious child-free minutes I had during the school day ticked away. Following an anti-inflammatory diet got me to add more fruits and vegetables and whole grains to my diet, which is a good thing for my overall health.

I just read a new book, Do You Believe in Magic? The Sense and Nonsense of Alternative Medicine by Paul Offitt, M.D. Offitt is a science guy through and through, known for his work to debunk the autism-vaccine link. I am already sympathetic to an evidence-based approach to medicine, so it didn’t take much for Offitt to convince me of his basic premises: that alternative medicine is largely unproven, and that alternative medicine practitioners have managed to convince the American public that they are providing “natural” (and therefore unequivocally safe and good) remedies over against money-grubbing traditional medicine and Big Pharma. Never mind that alternative remedies make millions for those who convince the public of their worth (usually without the benefit of scientific study), and that many natural substances are potentially dangerous and many manufactured medicines are plant-based. Most bizarre of all, the alternative medicine industry (and it is just as much an industry as traditional medicine, just without oversight or science to back it up) convinced the public that by preventing the FDA from testing and regulating natural remedies, such as vitamins and supplements, they would be taking charge of their own health, empowered to make their own decisions about treatments. Of course, because that effort succeeded and the FDA does not test or regulate alternative and natural remedies, people now make those decisions and spend billions on remedies without any information about whether or not they work. Which is not exactly empowerment, is it?

Offitt is not completely anti-alternative medicine. He points out that, though acupuncture has not been proven to be more effective than a placebo, it can be as effective as a placebo—and the placebo effect is a real phenomenon. When people feel relief because of the placebo effect, that relief is real. 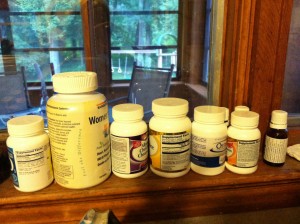 He also points out that numerous studies show that people who take lots of vitamin supplements actually have a higher rate of cancer and heart disease, and a shortened life span, compared with those who don’t take supplements. In the face of the failure of naturopathy to make any significant difference in my pain or function, I was planning to at least finish the bottles of vitamins sitting on my kitchen windowsill. Can’t hurt, right? Now I’m not so sure.

I am disappointed that, after so much hope and effort and money, I’m not seeing any difference in my daily life. But I’m glad I gave naturopathy a try, otherwise I would always wonder if I was missing something. Now I’m left with what I started with—my ability to cope. Which is a pretty powerful thing. For more thoughts on pain and coping, read the guest post I wrote for Scott LeRette’s award-winning Austintistic blog. Scott’s son Austin has both autism and OI (the same bone disorder I have). I got to know Scott because a writing colleague, Susy Flory, is working with him on a memoir called The Unbreakable Boy, to be published next year by Thomas Nelson. My guest post is titled Not All Pain is Gain: On Learning to Cope, and you can read it here.

June 28, 2013 [Snapshots from Oak Ridge] Banishing the Bugs
Recent Comments
0 | Leave a Comment
Browse Our Archives
get the latest from
Ellen Painter Dollar
Sign up for our newsletter
POPULAR AT PATHEOS Progressive Christian
1