God is a Trick of the Light

It was a trick of the light, I knew. But oh, what a trick.

Driving home on a November evening as a cold front swept in, clearing away the day’s heavy, damp air, I saw on my right the western sky blazing, glowing, turning even the dull brown oak leaves flaming gold. On my left, a rainbow, brilliant and bright, visible end to end. I kept expecting the spectacle to vanish, to wash away into a regular early evening sky. But the colors just deepened, until it seemed the sky, the trees, and the land itself were shimmering with heat and energy, burning from a benevolent fire that would not, could not be quenched.

I took photos. They were a disappointment. I knew they would be. 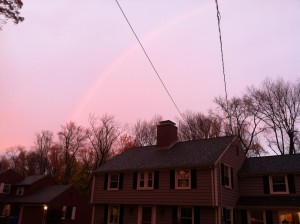 I know that rainbows and spectacle sunsets are simply tricks of the light, their ingredients the same water vapor, the same sky, the same sun that we can see above us every evening. They happen when the water and light and air come together just so. They cannot be captured, by hands or words or cameras (at least not without special filters and whatnot). If I tried to find the rainbow, to get right up next to it, to reach out and touch it, I would find nothing but cool air and water droplets, see nothing but a pale gray sky on its mundane journey toward nighttime pitch.

This rainbow that I could not capture or touch, this sunset that was a fleeting, lucky symphony of light, air, and moisture—they transformed everything. The trees and houses. The busy roads filled with commuters and parents like me, shuttling children here and there. My mind. My heart. They were so beautiful, their glow so bright. They felt like magic, like revelation, like love.

I think that God is like the rainbow and the sunset I saw that night. We cannot capture God with sight or words or doctrines. Our attempts to prove to ourselves that we see what we see and know what we know, to convince others that God is real—they always fall short. We end up with words and pictures that only reveal a tiny and inadequate bit of God, the way my camera captured an arc of light over our house but not the candy-colored miracle of the rainbow, the way it captured the stark contrast between dark trees and glowing sky but not the way the sky made the trees look like they were on fire.

God is a trick of the light. But oh, what a trick.

And before you start to worry, thinking that I mean that God isn’t real, that God is just a made-up thing we think we see but that doesn’t really exist, think again about the rainbow and the golden western sky.

They were real enough to take my breath away, to make me (and other drivers on the road that night) stop on a routine drive home—more than once, in fact—to take it all in.

And the sun and the light and the water droplets and the wind that came together to create the whole overwhelming spectacle, they are real too. Really real, in that scientific way that some people insist is the only way to know what’s real. Real enough to see and measure and count on. It’s just that most evenings, we don’t see how miraculous they are. Most evenings, we don’t get whacked over the head with how beautiful they are.

November 11, 2013
Redeeming My Grocery Routine to Feed Those Who Are Hungry
Next Post